Mackenzie on O’Halloran incident: “I was never even in trouble at school” 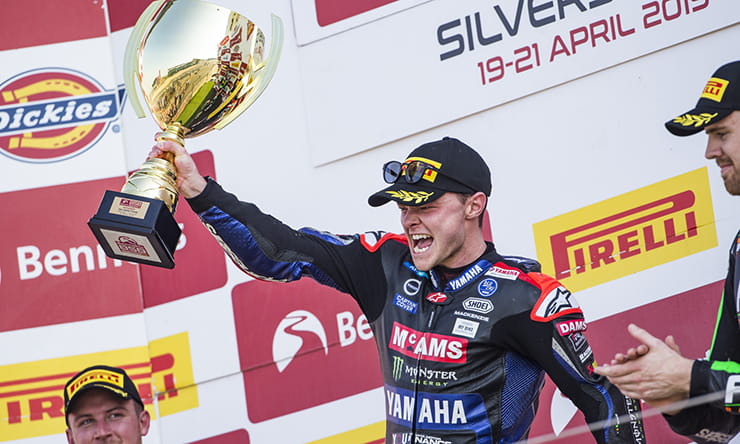 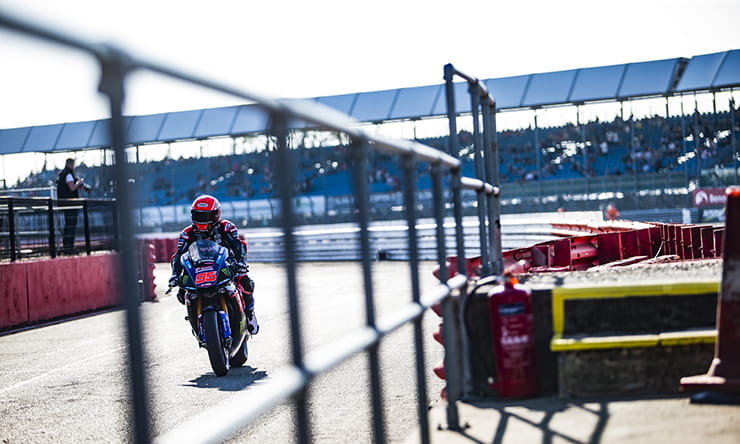 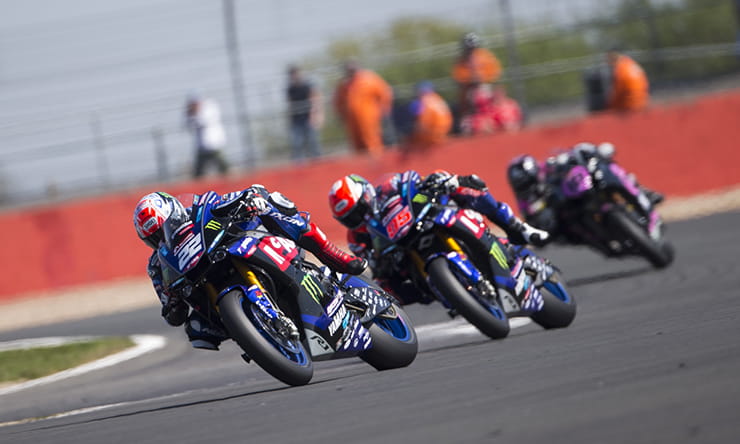 McAMS Yamaha’s Tarran Mackenzie was one-win shy of a dream start to his 2019 Bennetts British Superbike campaign, taking pole for both races and a race win, but it was wasn’t without controversy at a scorchingly-hot Silverstone.

The Ashby resident collided with team-mate Jason O’Halloran on the final lap of the opening race, taking the ‘O’Show’ out of proceedings with Mackenzie recovering to cross the line first.

After the incident was investigated by MSV and race director Stuart Higgs, Mackenzie was handed a three second penalty dropping him back to second place and gifting the victory to Northern Irishman Josh Elliot, a career first for the OMG Racing man.

But, Mackenzie admitted after the weekend to BikeSocial that he’s not a dirty rider, and that he’d never really been in trouble all his life, not even when he was at school. 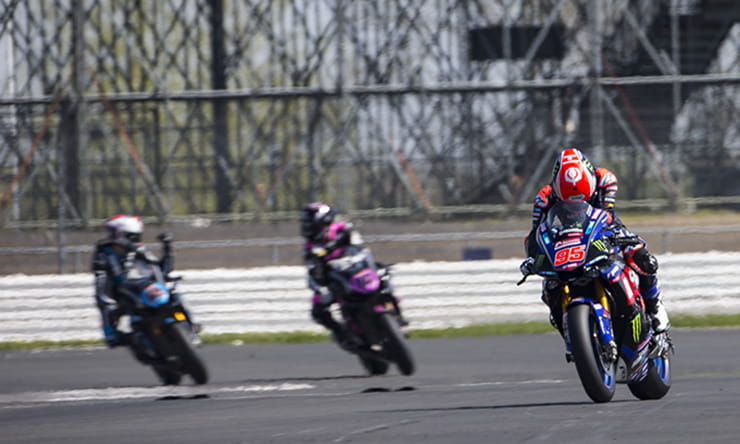 “I was never even in trouble at school,” joked a smiling Taz with his trophy in hand. “Genuinely never through middle school, high school or anything, I might have got told off in class but it’s surreal because I’ve never been in trouble before, never mind here.

“I’ve never knocked anyone off in my life and I’ve never even been up to race control before or anything like that. So, as I said, I didn’t do it intentionally, rubbing is racing as they say and unfortunately, he got the s****y end of the stick.

“I struggled a little bit in race one and then I managed to catch him on that last lap, he ran wide and obviously I went for it. It is what it is, he’s fine luckily and fortunate for me I could manage to win race two, so it wasn’t all bad for the team.”

After the incident took place both McAMS Yamaha riders were taken to race control to talk about the event, and both eventually kissed and made up, but Mackenzie was quick to admit that the Australian took it well and moved on, but for how long, nobody knows. 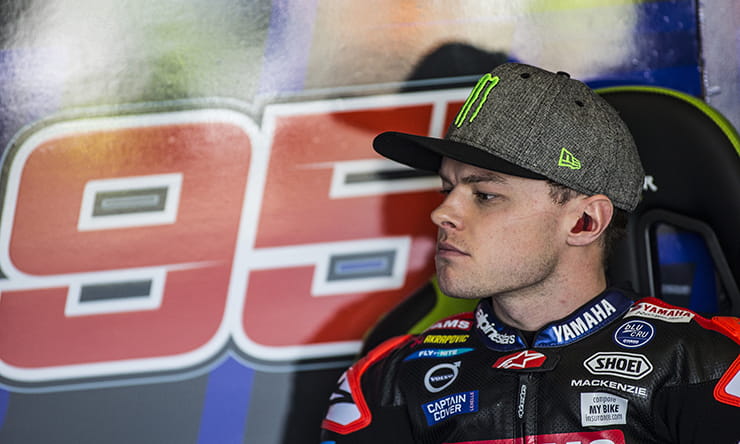 “Your adrenaline is running on the last lap and I wanted to win as much as he did, it was just unfortunate.

“One that we collided, and he came off, and two because he is my team mate and not that I’d do it to anyone else, but with it being your team mate it becomes a team issue and not just the riders.

“I apologised and he was very calm and cool about it. Obviously, I think he was annoyed but he took it well and hopefully we can brush over it and try and stay clean for the rest of the year now.

“We’ve spoken about it a little bit during the stewards enquiry so I don’t think he’s going to be my best mate now, but he is my team mate at the end of the day and he knows how good my bike is and I know how good his bike is so it becomes down to the rider.”

Race two saw at Silverstone saw Mackenzie battle it out with a whole host of different riders, swapping places all race long until the pint-sized Taz pulled the pin with a handful of laps to go. 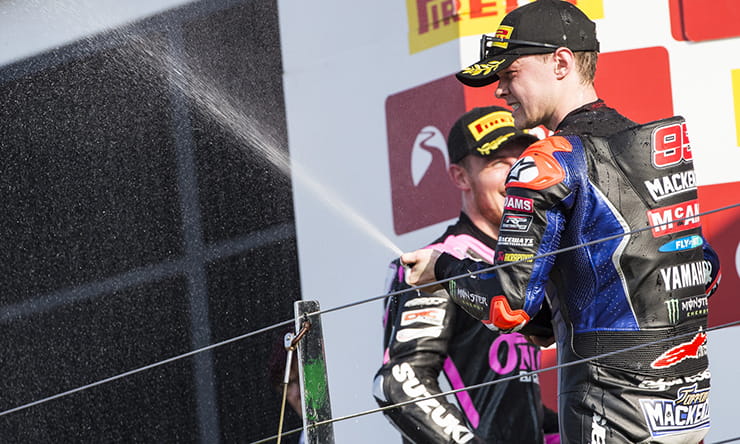 But after O’Halloran was forced out due to technical issues after just five laps, it was left to Mackenzie to fly the sole McAMS Yamaha flag.

However, he expressed that he was disappointed at not being able to fight with his team-mate once again for the win to prove the dominance of the Fleetwood based squad at Silverstone, and that he is a force to be reckoned with in 2019.

“I got the win taken away from me in race one but I wanted to make amends in race two and unfortunately Jason broke down, or I’m not sure what happened, but I saw on the big screen he was out.

“I wanted to have a proper go with him really because he’s been the one that’s set the pace all Winter, and at Silverstone up until qualifying.

“So, it’s unfortunate for him but when the safety car came out I knew I had something left in me to try and win it. I managed to just get some breathing space between me and Josh (Elliot) to come across the line and get my first win so I’m over the moon.” 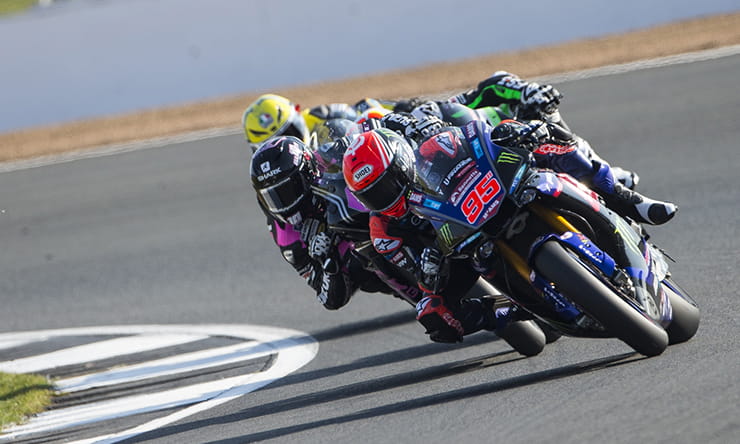 It’s been a bright start to 2019 with the Yamaha showing that you keep an old dog down, with Mackenzie on the podium twice, O’Halloran leading the way in practice and race one, and Santander Salt TAG Racing’s Dan Linfoot going off at the front in race two, it bodes well for the four year old machine in a Championship made up of brand new machines.

And the joint-Championship leader expects that is there is more to come from him and his McAMS Yamaha over the coming rounds, also firing a warning shot to his competitors that he now he has a wining feeling, he doesn’t want it to fade away.

“It had been a tough pre-season,” added Mackenzie. “Even at the Silverstone test, and I struggled a little bit on Friday, but we managed to find something with the bike which just made it a lot easier for me to ride, so it gave me a lot of confidence. I then went on and managed to get my first pole, and then pole again for race two.
“The bike is very good, Jason has proved that coming off the Honda and jumping on it straight away, he was very competitive.

“We made some improvements over the Winter, only little bits. Jason has many years experience on a Superbike, so for him it’s probably a breath of fresh air but you have to remember I’m only just coming into my second year.

“I’m still learning, I need to still make some improvements myself and learn how to ride this bike. I’m doing an ok job at the moment, I think, but there is definitely more to come. I wanted to win at Silverstone and now I’ve got a taste for victory, I don’t want that to go away.”