Brookes fires a warning shot: “I’m now able to take it to the limit” 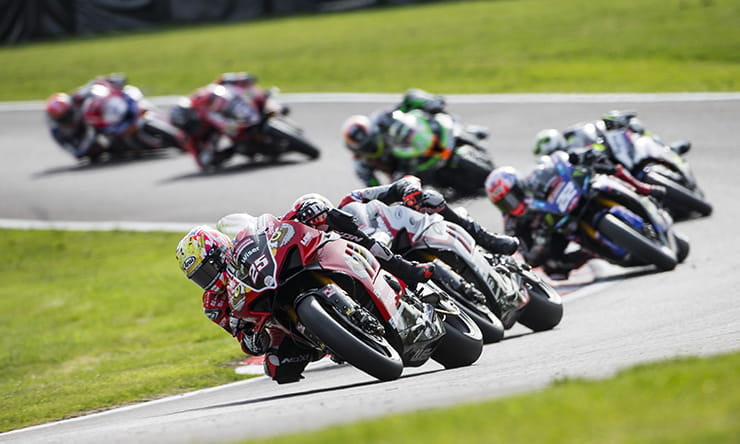 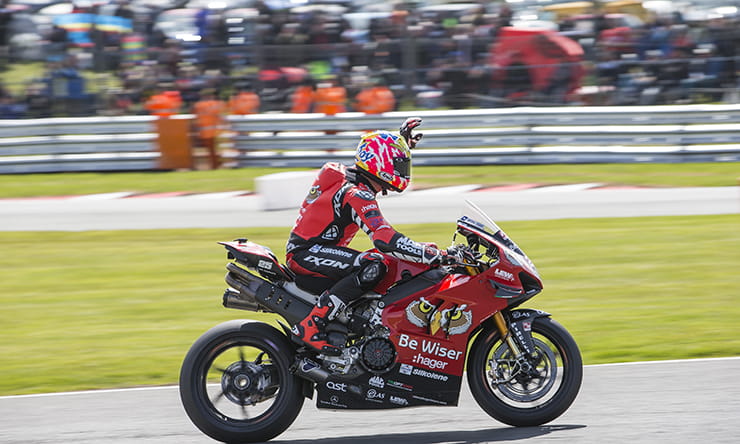 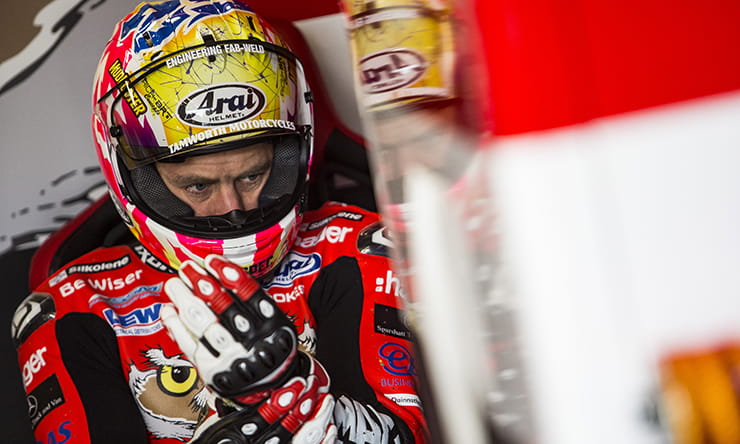 Josh Brookes fired a warning sign to the rest of the Bennetts British Superbike Championship at Oulton Park with a dominant display collecting both victories on Bank Holiday Monday.

The PBM Ducati rider, who headed into the second round of the Championship having not scored a single point at Silverstone, was unstoppable all weekend in all conditions in Cheshire, walking away with 50 points and the rest of the paddock in awe of his domination.

“I’m obviously over the moon, we couldn’t have rebounded back in a better way,” Brookes told BikeSocial wearing his Dickies ‘rider of the day’ Stetson from his garage.

“I think the team beat themselves up a little bit too much after the first round, bad luck can come to anyone and I feel like we had lots of it at Silverstone.

“With the new bike and everything being fresh, when you’re trying to race them at the highest level everything is at its maximum, so from time to time you’re going to have failures. 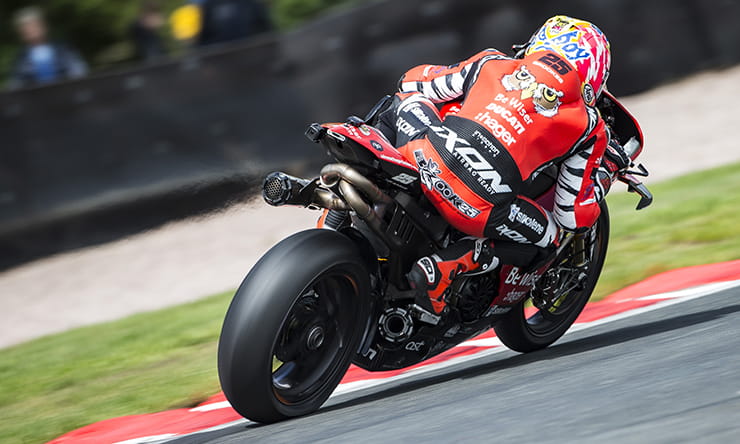 “I think everyone took it quite bad after Silverstone, the team has a high reputation, so it didn’t represent everyone very well, and the victories were the perfect way to put ourselves back in the fight for the Championship.

“It shows that the bike is good enough and that the team has what it takes, and that if all is going well then I can do the job as well.”

Brookes came in to the weekend at Oulton Park as the favourite following the success he, and his team, achieved at the recent official test the BSB paddock undertook at the 2.6 mile circuit.

Although Oulton Park is not one of his favourite tracks, Brookes admitted that even he was surprised with the pace he showed and he was extremely pleased that lady luck was on his side.

“After the test I had a little bit of confidence that I could do those lap times, but leading up to the test I didn’t know what to expect from the bike at Oulton. 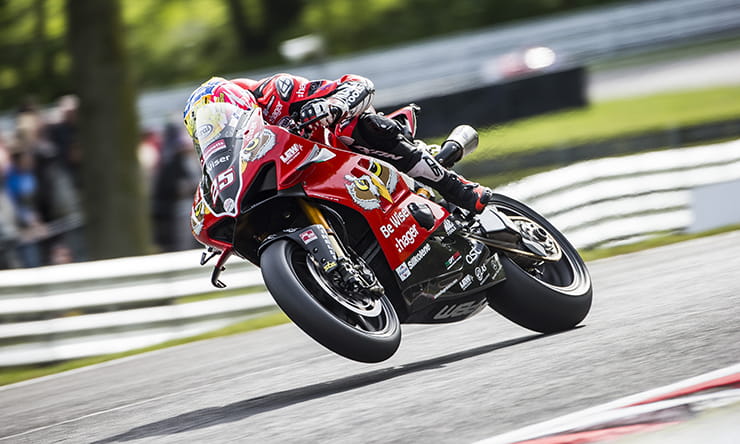 “But after the test, the bike performed perfectly, I knew we had a good chance of a weekend like we had, but obviously I still had to make it happen.

“With the weather going up and down all weekend, I could have slipped off or anything could have happened.

“We lost a little bit of time with settings we wanted to try because of the wet weather, but fortunately we were able to maintain the dominance of the lap times, and that was what dictated the result for us.”

It was news that shook the BSB paddock and fans alike back in October 2018 when it was announced that Brookes would move to the Be Wiser Ducati outfit run by Paul Bird, because in recent years the Bringelly man has always been a rival to the team that fielded Shane ‘Shakey’ Byrne.

But, it was a welcome move for Brookes, who after two years with Yamaha teams, the TAG Racing and McAMS Yamaha outfit’s, he felt it was time for a change to test himself. 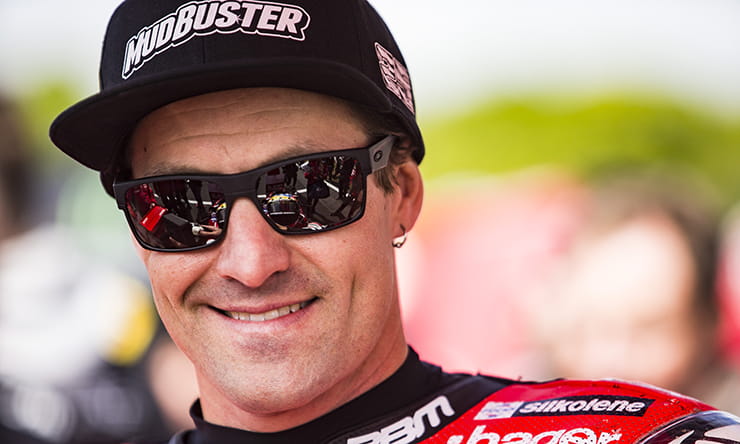 “Things just needed to change, that is probably the best way I can describe it, I would have liked to have got things right last year and I know I could have been stronger, but I just wanted to have a fresh start.

“I’ve always been a rival to the Be Wiser Ducati team, they’ve always been the Repsol Honda of the BSB paddock, everyone aspires to be in this environment.

“So, when I got the opportunity to come here, I was ‘yeah, I want it.’ It’s great to finally be in a team that is considered to be one of the best, obviously that carries a lot of pressure, I have to perform well, you can’t go into a team and become lazy the bike doesn’t take itself around the track.

“But at the moment I’m enjoying it, I’m not trying to get too excited because at any point it can go wrong, bikes are unpredictable but right now I want to keep my feet on the ground and focus on the next challenge, and that could come from any rider at the next track.” 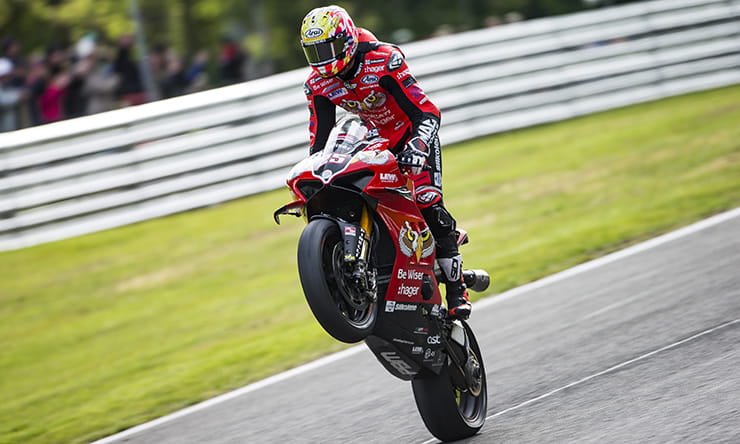 With over 220 Bennetts British Superbike race starts, ‘Badboy’ Brookes is the most experienced rider on the grid in 2019, and he felt that experience he could draw on at Oulton Park helped him cruise to victory.

“My experience at Oulton Park certainly played in to my hands, for the likes of Fores and Redding they will have suffered massively through lack of experience.

“The track is one that takes years to learn and even when you think you’ve learnt it you uncover new secrets and it takes years of experience to go fast at Oulton.

“I think my experience was an advantage for me, I had to pounce when I had my moment and hopefully this does shock a few people, but that is our job and that is what we all come here to do.”

The change of machinery for Brookes made for a challenging winter and a busy testing programme out in Spain and the UK, but the 36-year-old admitted to BikeSocial that the Ducati V4R is very similar to recent machines he’s mounted.

And he added that he’s pleased to have the bike working as he wants it so early on in the campaign for his second British title, a warning sign for his closest challenges. 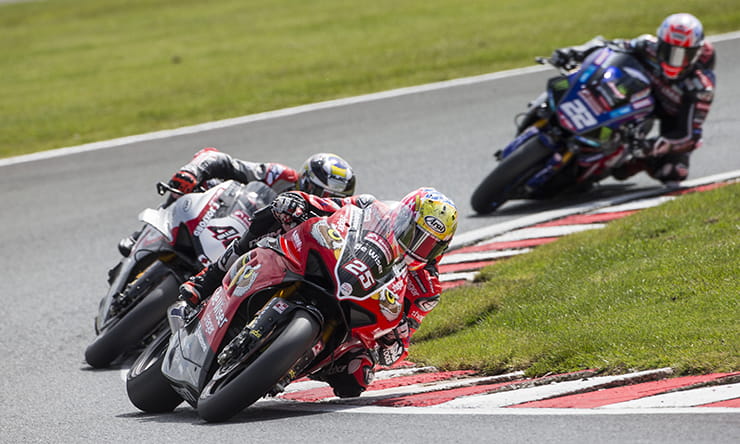 “It’s very similar to lots of machines I have ridden, chassis wise and suspension wise, it doesn’t stand out in some sort of an amazing moment of ‘oh my god.’

“But it works very efficiently, the engine compliments the rest of the bike well and it has all the loose ends tied up. It’s a well thought out and designed project from Ducati so it makes my job easier.

“Whereas on a bike you’re not happy with, and is not performing correctly as you know it, you have to take more risk to make it competitive with the other riders, and then it becomes harder.

“So, what I’ve found is that the bike is working properly so I’m able to take it to the limit where it needs to be ridden at to win races, and I don’t feel like I’m about to crash, which is an extremely rewarding situation to be in.

“What is particularly interesting from my side is that we’ve got a bike working so early on in the season, I believe I can get a bike good and race ready over a period of time if the opportunity and materials are available to do so, but to have it ready and competitive this early on in the season is a great achievement, and I’ve got to thank Ducati for doing such a good job.”