BSB | Bridewell: “It’s what I expect every weekend” 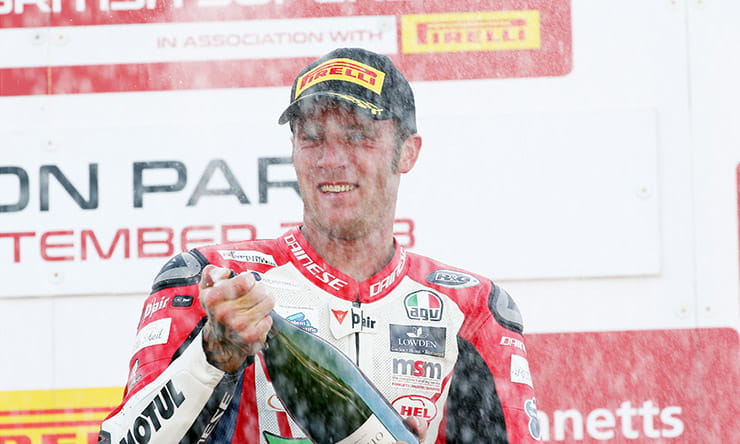 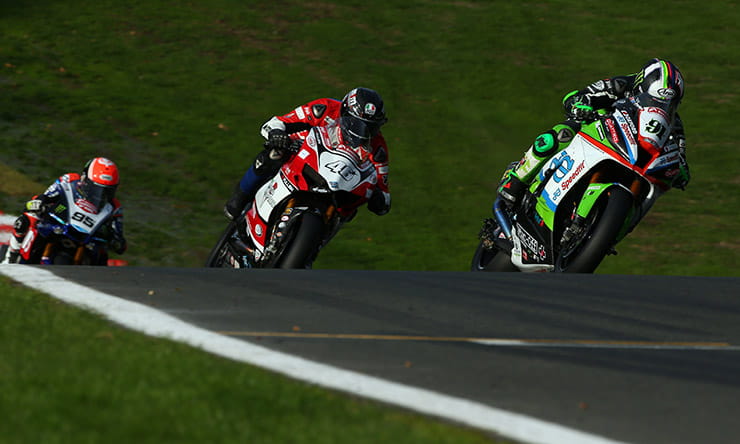 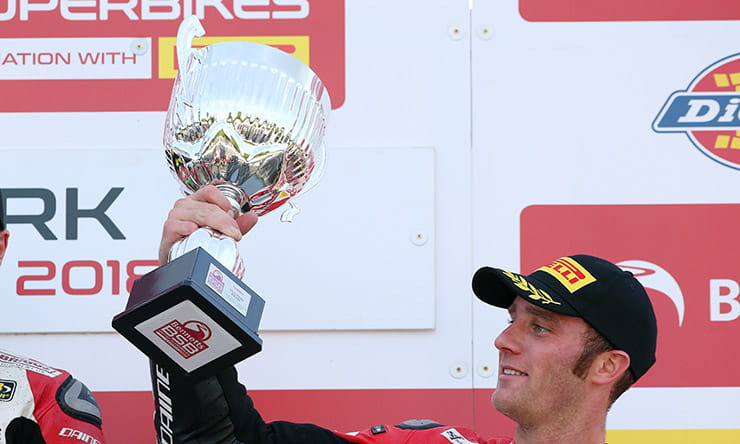 Bennetts British Superbike veteran Tommy Bridewell supported the efforts of his Moto Rapido Ducati team as he returned to the podium at Oulton Park, picking up two podiums in both races.

Bridewell walked away with a second place in a soaking wet first race at Oulton Park, and a hard fought third in fully dry conditions in race two, giving him his first podium since 2016.

Race one saw him take off at the front, building a manageable lead over Jake Dixon, although the title fighter soon reeled the paddock joker in. Bridewell settled for second after seeing a 16 second gap over third place.

The second outing saw Bridewell battle throughout to collect further silverware, keeping pace with Championship leader Leon Haslam as they chased down runaway leader Jake Dixon at the front.

But, the 30-year-old was quick to heap praise on Steve ‘Wilf’ Moore’s Moto Rapido squad, admitting changes to his Ducati were minimal throughout the weekend at the 2.69-mile circuit. 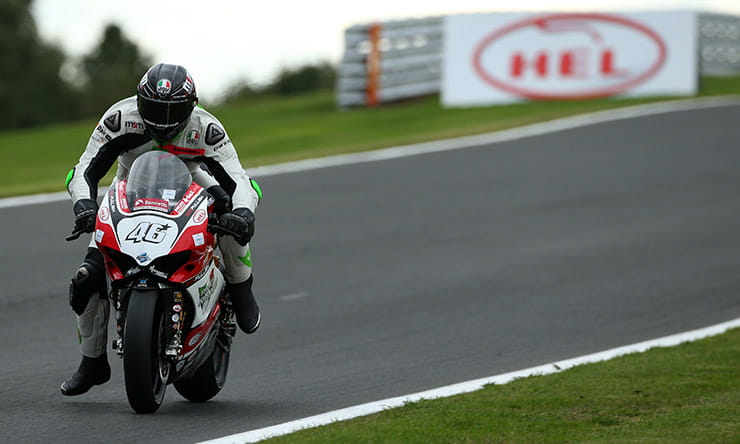 Bridewell was back to his best at Oulton

“The whole weekend was good,” Bridewell told BikeSocial with a smile on his face. “From FP1, 2 and 3 we had a good, stable and consistent package.

“We didn’t have to make drastic changes, it was just small bits and pieces to make, not so much a lap time, but to make the bike a little bit easier and comfortable to ride.

“I knew we had good pace in wet and dry conditions, but I didn’t think we’d be tested to put that theory to practice.”

It’s been a challenging season for Bridewell, who was dramatically sacked after the fourth round by Martin Halsall’s Movuno.com Halsall Racing team, and he still doesn’t understand the true reason as to why.

The Wiltshire man received a call from team manager, Colin Wright, just minutes before he was due out on track at Snetterton in the afternoon’s qualifying session.

After missing the next round in Scotland at Knockhill Steve Moore was quick to secure the signature of the former Showdowner, after he and Taylor MacKenzie parted company. 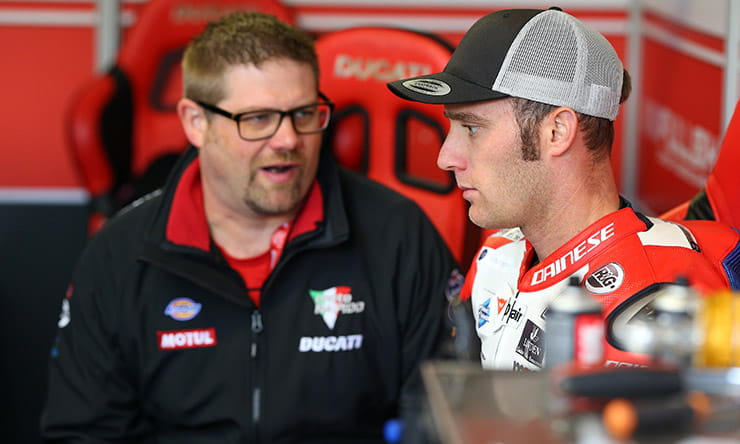 Bridewell and Moore are two peas in a pod

But, Tommy’s performance at Oulton Park has proved the doubters wrong, and that the move to the Moto Rapido Ducati team has proved to be right decision, and he expressed his pride in getting back on the podium.

“It’s awesome to be honest, to go out in the real wet and clear off like me and Jake did, and then to do it all again in the dry.

“I knew that Jake and Leon were going to be the danger men, Jake had strong pace even in the wet. I could have run with him in the first race, I’ve got to be honest I just needed that podium and to get the monkey off my back.

“But it was a great job by the team, they gave me a great bike and it didn’t miss a beat all weekend.”

After being with Steve Moore’s outfit for only half of this season he has currently picked up 96 points, just 18 less than what he collected in the previous season and half.

18 months in the wilderness has seen Bridewell fall from a Showdown contender to mid pack, after switching from the Bennetts Suzuki squad to the Team WD-40 Kawasaki team for 2017.

Teaming up with Martin Halsall once again at the start of 2018 for the Bolton businessman’s return to the paddock looked like the dream team, although tough results, a change in management within the team and ill feelings saw Bridewell ultimately sacked. 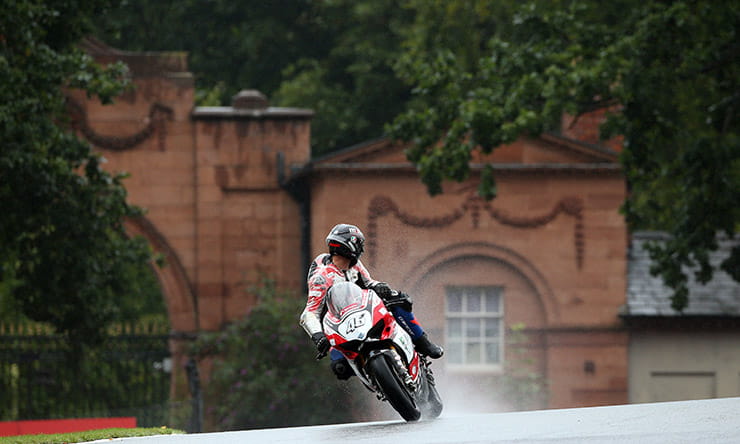 In a league of his own

Many have been surprised by ‘Rock on Tommy’s’ recent come back, although the Devizes man admitted his upturn in form is nothing less than what he expects of himself, and it was only a matter of time.

“The weird thing about it is, it’s not something I didn’t expect, it’s not surprised me,” Bridewell said. “It’s what I expect of myself every weekend, I don’t feel like a duck out of water, I’ve now got the bike and the team to go out and do it, that’s the difference.

“Race one couldn’t have gone more to plan, I had a plan in my head and that was to get out the front and try and check out. I said it loosely and joked about it, but it almost went to plan, and it was a much easier race.

“Race two I didn’t get a great start, but I held my grid spot, I knew Michael (Laverty) didn’t have the pace that me, Leon and Jake had, and I didn’t believe that Jason (O’Halloran) did, so I knew it was between me, Jake and Leon. I knew I at least had to get into third.

“I had to work for it that’s for sure, but once I got into third I was away and us front guys were gone, but it was a great day overall.” 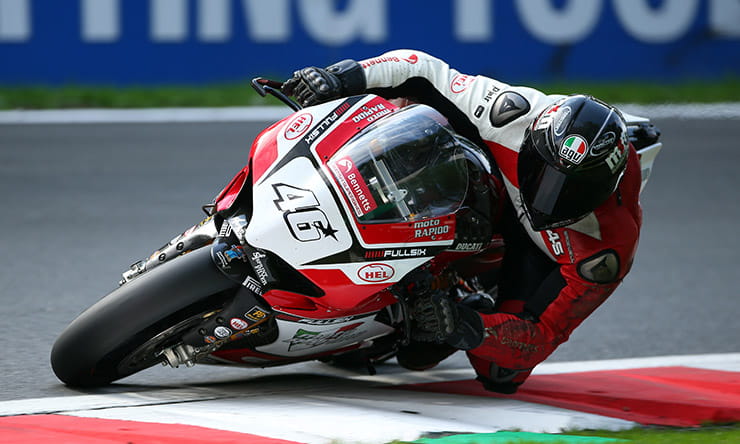 Bridewell has looked at home on the Ducati

Bridewell is now just 10 points shy of seventh place, which is currently held by Jason O’Halloran, and five riders are in the hunt for the ‘Riders Cup.’

The ‘Riders Cup’ is the award handed to the man who finishes the season in seventh, and the best of the rest who didn’t achieve a Showdown. Tarran MacKenzie, Danny Buchan, Christian Iddon and Bridewell are covered by less than 11 points.

All are currently in contention to challenge the Honda Racing man for that seventh place, and the chance to be the 2018 Riders Cup winner, but Bridewell told BikeSocial he wants to mix it up in the Showdown, and he isn’t afraid to hold back as he hunts for further glory.

“On the flip side, I’m here for myself, I couldn’t care less who wins the Championship, or who finishes second or third. I’m here to win races and that’s what we need to start trying to do, we’ve got the ball rolling.

“If the bike works like the Yamaha did at Assen, which the Ducati is very, very similar to the old Yamaha, I think we’ll be in for a good weekend.”

Tickets for the trip to the TT Circuit Assen and the penultimate round of the Bennetts British Superbike Championship are available shop.msv.com, for just £36 for the full weekend.