BSB | After finishing every race and with 15 wins, Haslam knows the key to success 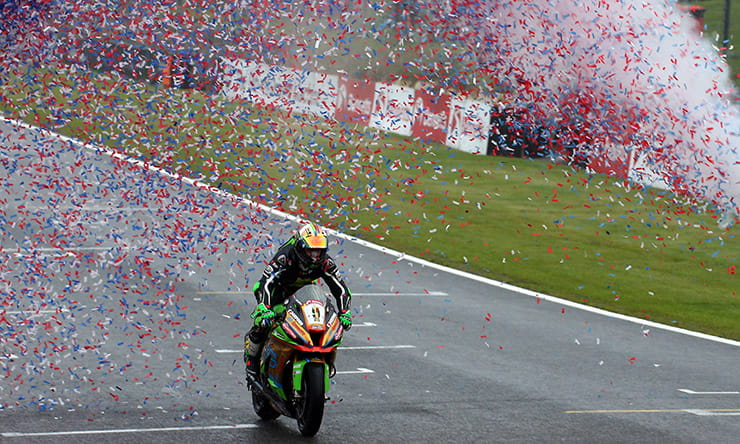 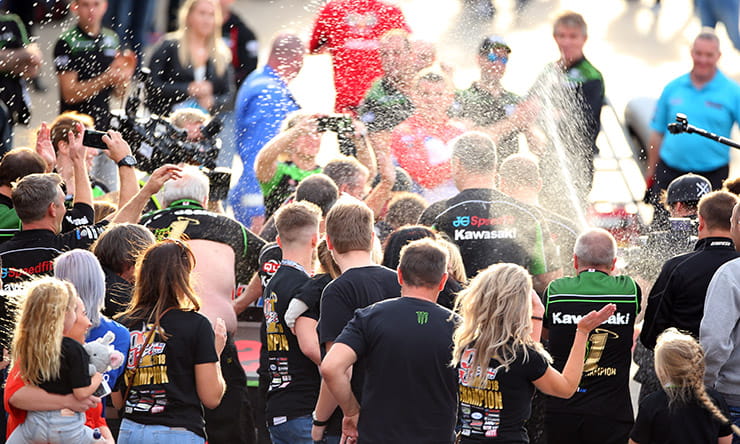 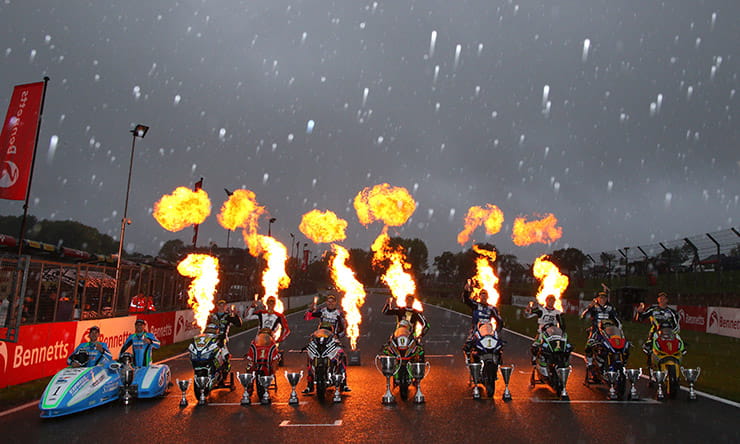 Haslam went into the final round with a lead of more than two race wins worth of points, and knew he needed just a difference of 11 points between closest rival and fellow Kawasaki-mounted Jake Dixon in race one to take his first British crown.

But, because Dixon failed to take the victory from Be Wiser Ducati’s Glenn Irwin in the opening race of the weekend, all the ‘Pocket Rocket’ had to do was finish sixth to claim the title, and he did just that.

Closing an almost faultless 2018 season with 15 wins, the Derbyshire man was quick to heap praise on his family run JG Speedfit Kawasaki squad. 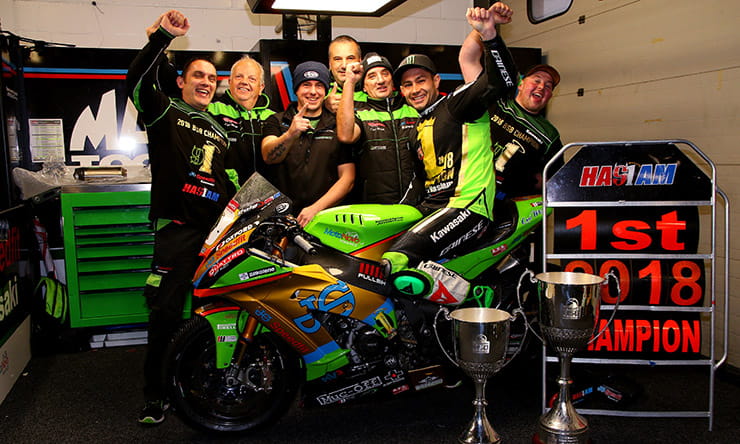 The team behind the championship

“I’m so happy, what a day, and I managed to get my win,” a delighted Haslam told BikeSocial after the Championship trophy presentation.

“I had a really good battle and race three was just full of moments for me, regardless of the result. It’s been an awesome year, I’ve finished every single race and taken away 15 wins, so what can I say? It’s a big, big credit to the boys and everyone involved, I’m so happy!”

Eventually finishing in third last year, Haslam came into 2018 with pressure on his shoulders as the clear favourite for the crown, and after breaking all records in a strong pre-season testing campaign all fingers pointed at Leon to be the man to beat.

He won the first five out of eight races, picking up the double at Oulton Park and Snetterton, after his closest rival Shane ‘Shakey’ Byrne was ruled out for the remainder of the season following a heavy crash in testing. 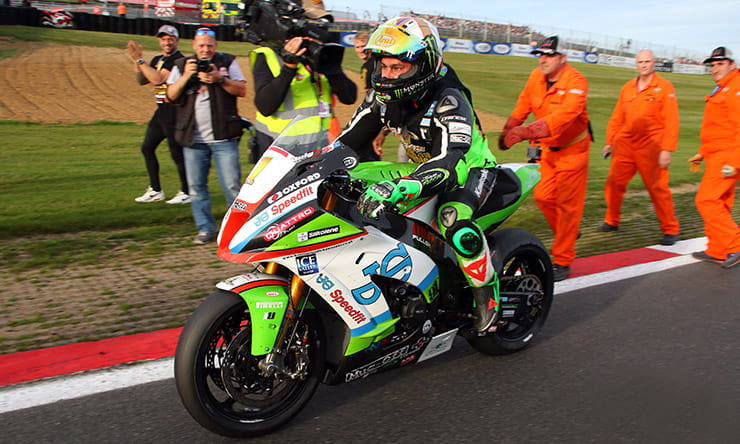 From then on the now KRT World Superbike star finished off the podium only once and secured his place in the Showdown with four races to spare, collecting the largest amount of podium credits amassed in the current format’s history; 68 to be exact.

But, some still felt that his luck had to run out much like 2017, however Haslam was confident that his factory backed team had learnt their lessons from the heartbreak of the previous year.

“Last year was mechanical, I had eight DNF’s but I think only one of them was my fault out of the eight.

“So, it just shows how much the team have stepped up, and the level of understanding they have of the bike so I don’t have to push to crash. Then that has resulted in the results we’ve had.

“As I have said, that’s a big credit to the team because I feel like I’m riding exactly the same, and we’ve gone on to get 15 wins and finish every race.

“There have been some good battles this year, but it has been more about sticking to the race plan and not over riding, which can result in mistakes and crashes.

“Calculating your race doesn’t result in 10-second wins, but it does result in wins. That has always been our game plan and that has worked.” 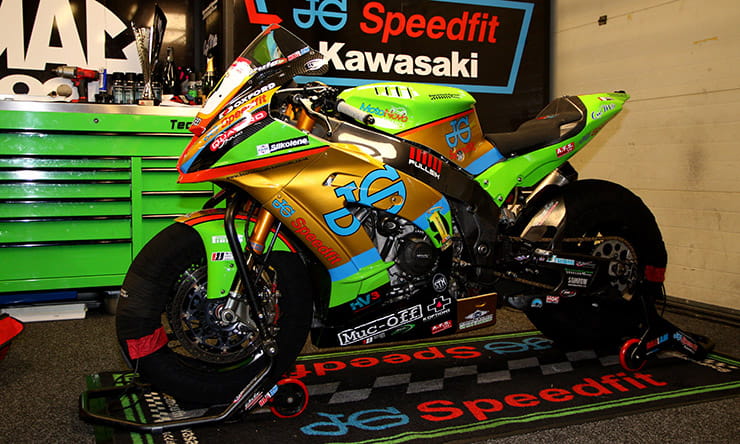 Although he’ll be riding a trusty ZX10-RR, Haslam will have some work to do when he gets back to work before Christmas. Switching back to different spec Pirelli tyres, full electronics including traction control, something in which he hasn’t had at his disposal in the last three years.

But, Haslam is relishing the challenge he faces in World Superbikes and told BikeSocial he knows the hurdles he has to jump, adding that none of his Championship winning crew will follow him across to KRT.

“You have to overcome whatever issues you’ve got, and understand where everyone’s at and with the bike. 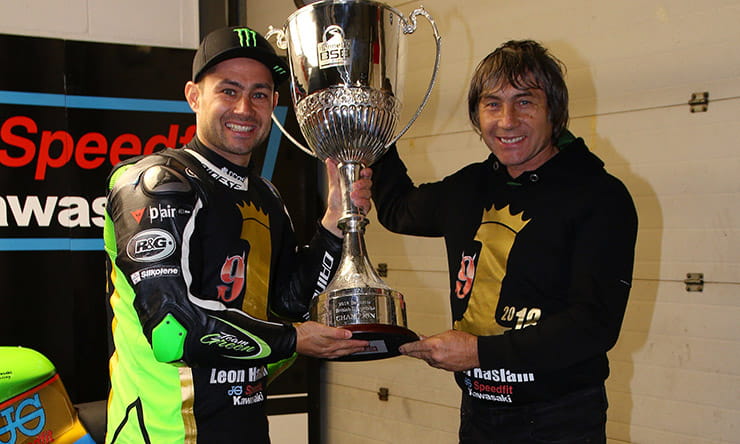 “Johnny is the man to beat, he’s absolutely dominating it at the minute so what a perfect rider to have next to you on the same bike.”

Haslam goes into the KRT team as number two the four-time Champion who, this season, much like the previous three has blown away his competition.

2018 has seen Rea dominate the series, picking up 10 wins a row and proving once again he’s the man to beat on the World stage.

But, the BSB Champion admitted he’s excited to work alongside his close friend, but the son of former Grand Prix star Ron Haslam admitted that he feels what Rea is producing is nothing less than what Haslam can muster up throughout 2019.

“It’s always good to have a fast team mate, and when you’ve got one that’s won four World titles on the bounce you’ve got perfect information and data. Whatever he’s doing I’m certain can do, I’ve got to get my head around it and try and achieve it.”

But all in all, it’s been a perfect year for the ‘Pocket Rocket’ in 2018, 15 wins, six podiums, 68 podium credits and a record-breaking end of season points haul.

And the Champion summed up his year in a few, but meaningful words. An emotional Haslam said: “This year really has been a fantastic year, I can’t believe I’m British Champion. Thank you to everyone.”