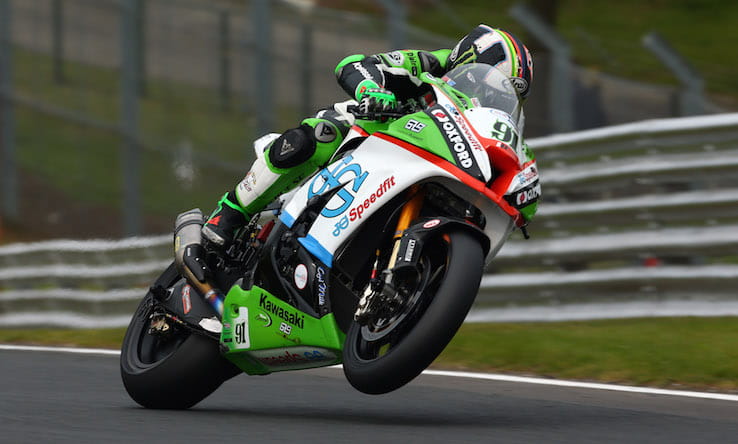 Leon Haslam stormed to his third race win of the season in the opening race of the bank holiday weekend at Oulton Park.

The series leader set the early pace aboard his JG Speedfit Kawasaki and pulled away at the front with Bynre (second) and Luke Mossey (third) in close company. However, neither rider could put a move on the ‘Pocket Rocket’ in the closing stages of the race.

Australian, Jason O’Halloran made a late surge through the field aboard his Honda to snatch fourth position from Peter Hickman, at the line. Whilst an impressive ride by James Ellison saw the Lancaster man jump from 15th on the grid to finish sixth ahead of Josh Brookes (seventh) and Christian Iddon (eighth).

A huge moment for Glenn Irwin on lap 12 saw the Ducati rider drop down into ninth, with youngster Jake Dixon rounding out the top ten.

After the race Haslam said: “We had a great test here last week and came into the weekend instantly on the pace. We did a lot of experimenting in practice and we’ve worked a lot on electronics and chassis setup."

“In the race the bike was faultless, it all went to plan again like it did at Donington Park. I knew we could set some fast times and I was confident I could up the pace towards the end of the race if I needed to.”