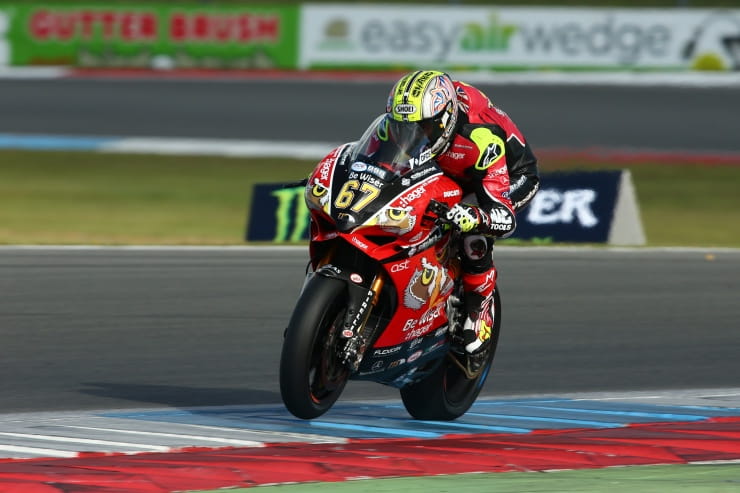 Shane ‘Shakey’ Byrne made it 50 career British Superbike pole positions this afternoon, after smashing the outright British Superbike race lap record in Superpole, posting a lap time that would be good enough to put him second on the World Superbike grid back in April!

After admitting yesterday that he and the Be Wiser Ducati struggled out on track, the four-time champion lived up to expectations and demolished the rest of the field, with the closest rider James Ellison half a second behind.

Byrne’s time would have been quick enough to line him up in second place on the grid for the World Superbike race that was held at the TT Circuit Assen back in April, and afterwards Byrne expressed that he didn’t make the most of the final eight-minute session.

“I didn’t make the best of the first lap, I don’t think I went hard enough on the out lap and perhaps didn’t get everything up to temperature properly,” said Shakey.

“I had one slow lap to give them plenty of space, Leon was on a good lap and I think Broc jumped on the back of him.

“Then I had a clear track all to myself, I had a small issue on that lap as well, I back shifted from fifth to fourth into the fast left hander and then the bike jumped back into fifth gear. When I accelerated out of the left it was as flat as a fart and that meant I had to back shift three gears for the final chicane.”

Technical regulations in the British Superbike paddock don’t allow for the electronic systems run in the World Superbike scene, and Byrne explained that he felt electronics would certainly be a benefit at the Dutch track.

“Certainly at a track like Assen you’d have to say that the electronics would be a big benefit. I really, really love my bike, when it’s in its window and working well it’s phenomenal.

“It’s difficult, because here you can run really, really high corner speed and you can be quite smooth with the throttle. It’s easy to hammer a tyre in five laps around here, and five laps isn’t going to win you a 18 lap race is it?

“We have to be careful tomorrow, we have done a little bit of work on both tyres this weekend, which I think is going to be key. We have done some reasonable lap times on both compounds now so I’m relatively happy and if it’s dry should be able to have two good races.

“It looks like we’ve found a good setting, especially in the dry, so now we’ve just got to wait and see what the weather does tomorrow and go from there.”

Alongside Byrne is the JG Speedfit Kawasaki duo of James Ellison and Leon Haslam, with Luke Mossey, Jason O’Halloran and Dan Linfoot rounding out the second row.