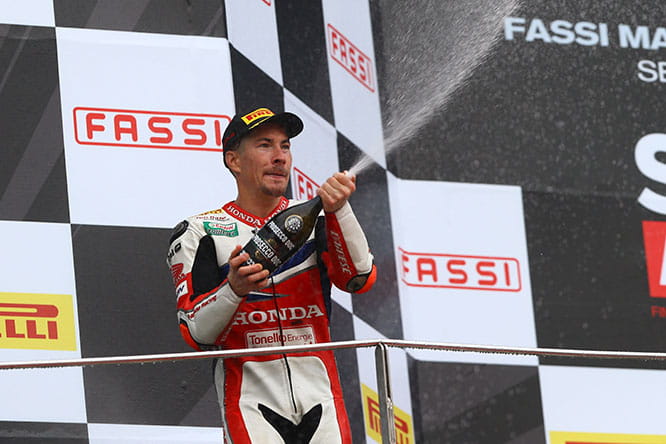 Nicky Hayden joined the small band of riders to have won both a MotoGP and World Superbike race. In doing so, he won his first race in 10 years and gave Honda its first victory in the class since 2014, with a masterful display in Sunday’s wet 16-lap race in Sepang.

The 2006 MotoGP champion overtook world champion Jonathan Rea at the end of the opening lap and showed his class to pull away by over a second at the flag.

Despite the tricky conditions, it was largely the usual suspects battling it out for the remaining podium places, with Rea battling with the Ducatis of Chaz Davies and Davide Giuliano. Wet weather maestro Ant West, making his world superbike debut, ran in fifth, ahead of Saturday’s race winner Tom Sykes, who surprisingly looked far less comfortable in the wet than he did in dry conditions and eventually slipped back to eighth at the chequered flag.

Sepang’s new surface provided plenty of grip, allowing for a robust battle between Davies, Giuliano and Rea for the final two podium slots

Italian Giuliano ultimately broke away from the British title contenders in the closing laps and put in a spirited charge to carve two seconds a lap out of the American race leader. Hayden went into the last lap with a one second advantage over the Italian, both pushing for their first world superbike race win, but it was the popular Honda rider who showed all his experience to manage the gap and become the 16th rider to have won both a Grand Prix and world superbike race.

Speaking after the race, Hayden said: “I’m very happy for this win. I knew I had a chance so I fought hard in the opening laps to get to the front and try to get a clear track and pull a bit of a gap.

“We had no idea what the tyres were going to do in the wet and as the track started to dry I was a little worried. It certainly wasn’t easy!”

Rea maintained his 100% podium record, finishing third ahead of Davies. Leon Camier was ninth on the MV Agusta. British champion Josh Brookes brought his Milwaukee BMW home in 12th. Alex Lowes crashed out on lap 12, while running in the top 10. He was one of only two retirements, despite the conditions.

In the championship, Rea extends his lead to 42 points over Chaz Davies, with Sykes third – 70 points behind his Kawasaki Racing Team team-mate.

The next round take place at Donington Park in two weeks time.