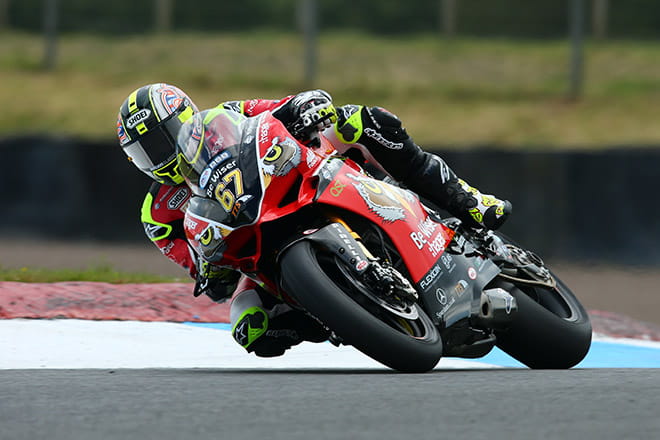 This weekend sees the British Superbikes head to Norfolk for round five of the series, held at the fast Snetterton 300 circuit.

All eyes will be on two men that are currently lighting up the championship, Shane ‘Shakey’ Byrne and Leon Haslam. Separated by just 13 points, this coming Sunday is set to be a thriller once again as the race for the top-six showdown hots up.

Four time BSB champ Byrne dominated at Snetterton in 2015, taking pole position and a double win, and he’s on the attack following a solid run of results on board his factory supported Be Wiser Ducati.

New upgrades are now available for the Sittingbourne man, including the delivery of a new exhaust system from Bologna, as debuted by the World Superbike team earlier in the year, which could see an improvement in performance for the red machine.

However, ‘Shakey’ will be looking over his shoulder at championship leader Leon Haslam. The ‘Pocket Rocket’ has been in Japan all week testing on board his Team Green Kawasaki in preparation for the famous Suzuka Eight Hour race next month, so jet lag could play its part. Haslam was fastest on the second day at the recent British Superbike test at the 2.9 mile Norfolk track.

The JG Speedfit Kawasaki rider will also benefit from some developments ahead of this round, with a new fuel tank and seat unit designed to help the weight distribution of his Kawasaki ZX-10R. Both men have shared wins in the hotly contested 2016 campaign but there are a group of riders nipping at their heels for a share of the spoils.

The Tyco BMW pair of Michael Laverty and Christian Iddon are looking to bounce back following a challenging weekend north of the border at Knockhill, with the former Supermoto Champion Iddon currently sitting in third in the standings, 21 points behind second place man Byrne.

Team mate Laverty left Scotland pointless, and out of the all-important top six in the championship, however after posting the fastest time at the recent Snetterton test, the Northern Irish man could be returning to the winners enclosure this weekend.

However, Laverty did explain that he hopes the weather is kind to the British Superbike riders as the grippier Pirelli rear tyre works better if rubber is laid down on the track beforehand.

“In terms of tyre selection the SC0 allows for fast lap times,” explained the former MotoGP racer. “But they work best when there is rubber down on the track I feel. So hopefully we will get good weather and lots of riders circulating through Friday and Saturday for that.

“It’s a great track to ride as it’s fast, wide and has good quality tarmac which is very smooth. In fact, it’s similar to some world championship tracks in that respect.”

Honda Racing’s Jason O’Halloran is another man to watch, after impressing many last year at Snetterton taking a double podium, and coming off a very positive weekend in Scotland two weeks ago, his confidence is brimming.

However James Ellison, Dan Linfoot, Richard Cooper, Peter Hickman and Luke Mossey are impossible to write off after their recent performances. Cooper sits fourth in the standings, with Ellison and O’Halloran in fifth and sixth.

Finally, this weekend sees the return of Australian Broc Parkes to the championship, who deputises for the injured John Hopkins on the EPayme Yamaha, after breaking his collarbone in a heavy crash at Knockhill.