Byrne out for up to a month after testing crash 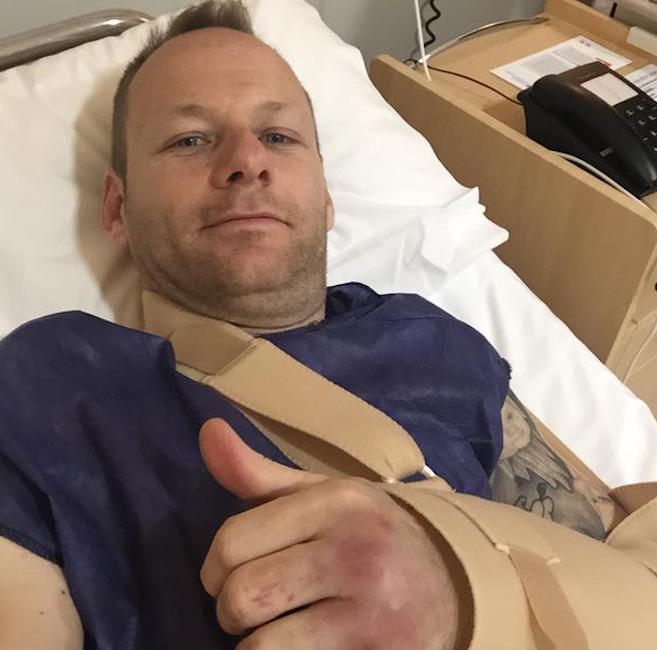 British Superbike Champion Shane ‘Shakey’ Byrne could be out for up to a month after suffering a heavy highside in Spanish testing.

Byrne crashed out on the second day of testing at the Almeria circuit in Spain, an off-throttle highside coming through turn six, a fast sweeping right-hander.

“It was a big off the throttle highside very similar to the one I had back at Silverstone in 2013,” said Byrne. “It’s funny, well, far from funny but when you have those kind of crashes that you weren’t expecting you always seem to get hurt more than when you perhaps wind it on taking liberties with no traction control.

“I’ve broken my left hand which resulted in an operation last night to fix it, long and the short is that one of my knuckles disappeared down into my hand and broke it. There’s no point in dwelling on it, I was operated on and with some screws and plates (a meccano set!) it’s all been put back together so I’m already on the mend.”

The 38-year-old was transported to the circuit medical centre before a precautionary trip to hospital, which revealed the four-time British champion had broken his hand and needed an operation.

After going under the knife late last night, Byrne revealed that the doctors have said he could be out for up to a month, ruling him out of the remainder of testing in both Spain and the UK and leaving him in a fight to be fit for the opening round at Donington Park in just under one month’s time.

“The doctor has said I need a month to heal up and be right which takes me exactly to the first round but I’m planning on heading back to the UK tomorrow to jump in a hyperbaric chamber and get the bones lasered etc so I’m hoping that will increase healing time considerably. I’ve supposedly got to keep this cast on for 2-3 weeks but I’ll see what my guy in the UK says and do absolutely everything I possibly can to be ready for the Donington Park test in three weeks.”

The Donington Park test takes place on 26th March ahead of the first round of the championship getting underway at the Leicestershire circuit in exactly a month's time.