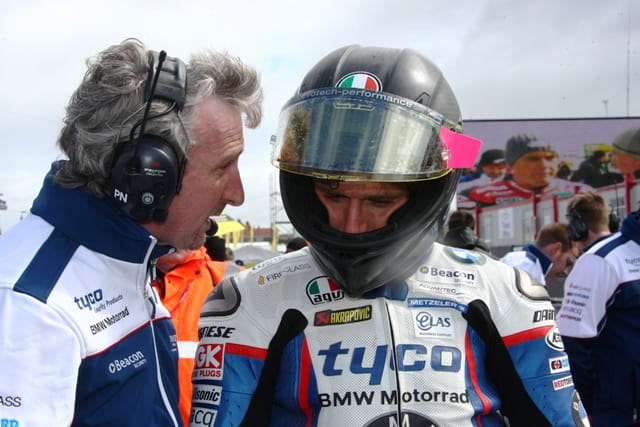 Tyco BMW boss Philip Neill has confirmed that Guy Martin will not participate in tomorrow’s Metzeler-backed Ulster Grand Prix, but has stopped short of confirming the exact extent of the injuries suffered by the popular TV star and road racer when he crashed during last night’s Dundrod 150 superbike race.

In a statement released by the team, Neill was quoted as saying: “Our thoughts are with Guy at this point in time, and although it is a real shame he will not be racing on Saturday – thankfully he will recover from his injuries and be up on his feet in a few days. As a matter of fact he is already talking about work on Monday!

“Guy was feeling really comfortable on the BMW Motorrad machinery this week, and his double pole position and a best lap of 133.176mph during last night’s Dundrod 150 race, confirmed to us that he had a great chance of adding to his impressive tally around Dundrod.

“Guy was well aware that Bruce Anstey wasn’t that far behind and was eager to get a good run out of Ireland’s Corner to set him up for his favourite part of the track. Unfortunately he got caught out by the highside, which has ended his Ulster Grand Prix for 2015, but full credit must go to the organisers for the improved safety measures at the circuit.”

Martin’s sister, Kate Farrance, had earlier suggested that her brother had suffered back and chest injuries in the crash, Tweeting: “ Waiting on official results but he’s broke his sternum, ribs and vertebrae. He's fairly beat up but he's a lucky lad.”