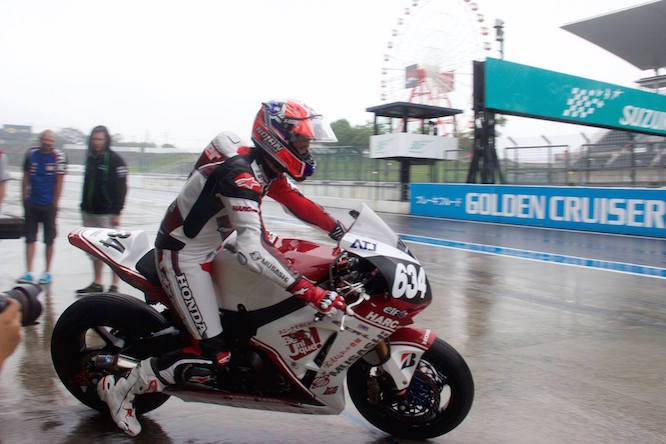 Casey Stoner flew to Suzuka this week to test with his Suzuka 8 hour team for the first time ahead of the prestigious endurance race later this month.

The twice MotoGP champion first tested the Fireblade earlier this year, but this is his first test at the Suzuka circuit on the machine alongside his team mates.

“Suzuka is a race I’ve had on my bucket list for a long time as it used to be a big part of the championships,” said Stoner speaking to Bike Social. “Unfortunately it’s now lost that status as the MotoGP championship is just too busy so none of the top riders have time to do it. Honda have been asking me to do it for a while so I thought I’d have a go. It’s going to be a long, hot race!”

World Superbike star Alex Lowes is also getting a taste of Suzuka for the first time with the legendary Yoshimura Suzuki team.

The first day of official testing has so far been very wet, but the track is starting to dry out.

Yamaha’s Bradley Smith and Pol Espargaro were in Japan last week testing the YZF-R1 for the first time alongside their 8 hour team mate, Katsuyuki Nakasuga.

This year’s Suzuka 8 hour gets underway on Thursday July 23rd.