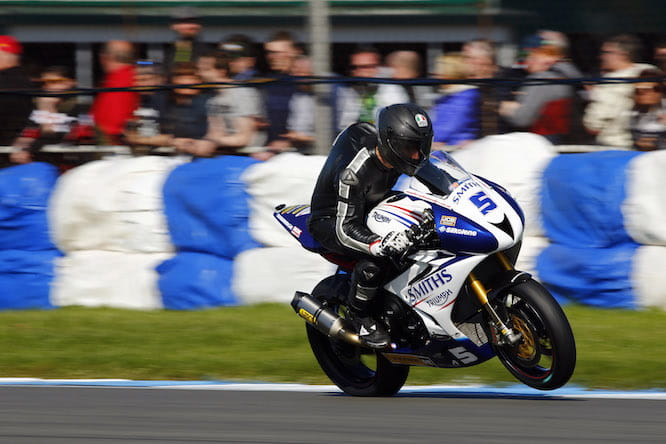 Guy Martin will no longer be racing in this weekend’s British Supersport race at Oulton Park.

The Smiths Triumph team had planned to run the Lincolnshireman in the British Superbike support series to enable him to spend more time on the Triumph Daytona 675 he’ll campaign in this year’s Supersport TT races.

However, two days before the round is set to get underway the Gloucester-based outfit has released a statement to announce the plan had fallen through ‘due to circumstances outside of the team’s control’.

Martin rode the Triumph in the first round of this year’s British Supersport championship at Donington Park earlier this month and despite not chasing results, he almost took a points finish.

Following a series of TV documentaries Martin has rapidly become one of the most recognizable faces in UK motorsport, meaning the Smiths Triumph truck and garage was swamped at Donington with onlookers hoping to catch a glimpse of the superstar.

The team’s statement read: “Unfortunately, due to circumstances outside of the team’s control, Guy Martin will no longer be joining us at Oulton Park this weekend. We are sorry to disappoint you all but rest-assured, we have more testing to complete before the Isle of Man TT.”