Kiyonari: "I think the rider was the problem" 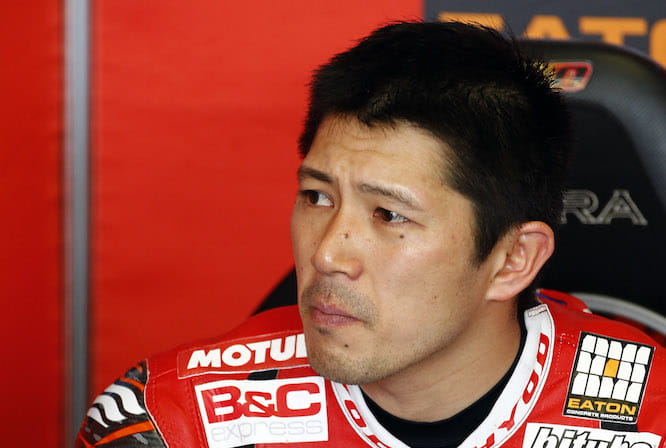 Ryuichi Kiyonari has admitted his dismal performance in today’s opening round of the 2015 British Superbike championship was down to rider error.

Despite dominating practice and qualifying, the Buildbase BMW rider struggled in today’s first race with what he described as a lack of feeling, falling back to fourteenth position before he crossed the line.

With the issues resolved for the second race, Kiyonari was in the middle of a five-way battle for the lead when a highside at Coppice ruled him out of contention.

“Up until this morning, this weekend had been almost perfect”, said Kiyonari talking to Bike Social. “We haven’t been fastest in every session but we were there most of the time. This morning the temperature was quite high, not very hot but it was much warmer than yesterday. The feeling of the machine, completely changed. It wasn’t a problem with the bike I just had no feeling. I thought I had a puncture but there was no puncture, the machine was good, the tyre was good. I think the rider was the problem, maybe too much thinking I don’t know.

“In the second race we made a small change and the feeling was better, grip with the rear tyre was still down but we had problems with rear grip all weekend and I can still get good lap times with that. In the second race front grip was much better but I have such a different riding style to the three in front. I need more corner speed and then get the drive but they slow, stop, turn and then go so I needed to pass them. Maybe because race one was s***, I was a little too tense and hurried things a bit.

“I’m happy because the feeling came back in race two but it’s like being a kid, if the feeling is good I’m like ‘go, go, go now!’  It was 100% my mistake, my head was gone, I wasn’t smooth enough and I’m so disappointed. It was a little bit too much, too fast and I started to slide. If I had been more gentle and smooth I would not have crashed.”

While acknowledging the crash wasn’t helpful, Kiyonari was more relieved that the race one problems were resolved and he found his pace again. This leaves him feeling confident ahead of the next round at Brands Hatch in two weeks’ time.

“The machine and the team are very good and have a lot of potential. Race one was a problem but we fixed it for race two and I have confidence ahead of Brands Hatch and I will try to win. I’ve been a little tense this weekend, a few mistakes on Saturday, Sunday OK and today was s***.”