Byrne: "I'm not feeling as sharp as I should be" 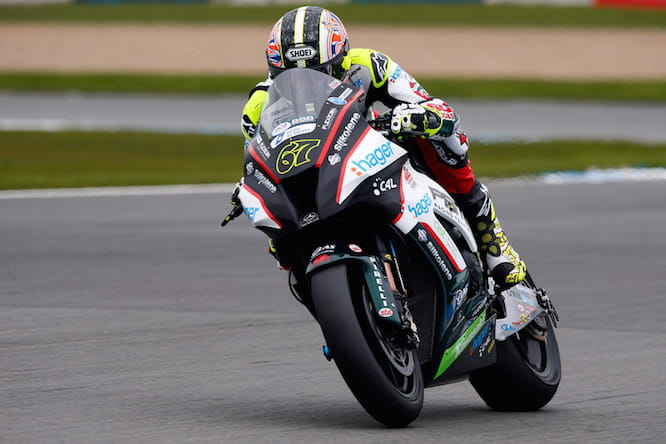 A disappointed Shane Byrne has admitted he’s not feeling as ‘sharp’ as he should after qualifying third for this weekend’s opening round of the 2015 British Superbike Championship at Donington Park.

Byrne approaches the new season having missed out on a large chunk of winter testing following suffering a broken hand and damaged ankle in Almeria last month. Despite this, he’s been on the pace all weekend but couldn’t quite do enough to beat Kiyonari in today’s qualifying shoot out.

“I’m not going to sit here and harp on about being injured and on the back foot, that’s a fact but it’s all if buts and maybes”, Byrne said after qualifying. “The reality is that we’re a little bit rusty; I’ve got to admit I’m not feeling as sharp on the bike as I probably should. The team worked incredibly hard over the winter to make the bike better in a lot of ways. They’ve achieved that but when you’re racing at this level there isn’t a certain part you can buy to bolt onto a bike to make you go instantly faster. That doesn’t happen, if it did we’d all be buying it.”

Ryuichi Kiyonari, who missed out on the title to Byrne in 2014 after breaking his collarbone at the final round, has been fast all weekend, not just over a single lap but also race distance.

“The problem is I’m trying to get that hard work together over the course of a race weekend,” Byrne continued. “When you’ve got Kiyo banging out the 1’29s like they’re going out of fashion and the others really close you get to a point where you think ‘I need to go fast too’. It’s great trying to develop stuff and make the bike better but the lap time has to come better too. I’m a little bit disappointed, I always say it’s important to be on the front row and we’ve achieved that which is great but I rode round Coppice on my slow down lap thinking ‘I didn’t do all this work to be two tenths off’.”