Byrne: I didn't expect to win! 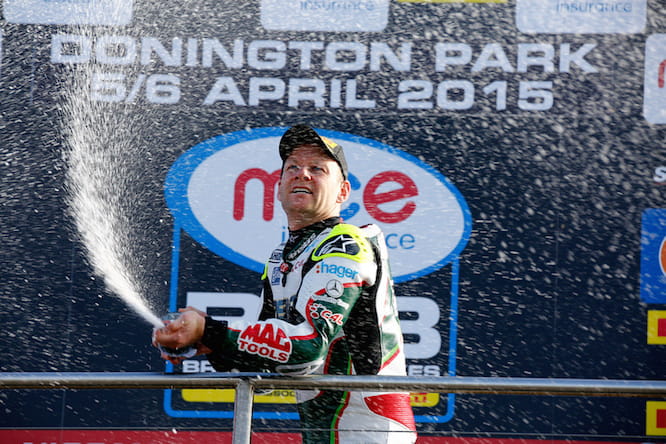 Shane Byrne has said that he didn’t think he’d be able to take victory in this weekend’s opening round of the 2015 British Superbike championship at Donington Park.

The four-times British champion finished second to James Ellison in the first race but just managed to clinch victory ahead of Honda Racing’s Dan Linfoot in race two, despite having broken his hand and badly damaged his ankle in a testing crash at Almeria just one month ago.

“Honestly I didn’t know what to expect this weekend”, said Byrne after the race.  “I said after race one that I felt quietly confident that we would get stronger but I didn’t expect to go one stronger in race two to be honest. We have all been around a long time and we know you can never expect anything. I expected a battle with Kiyo, Josh and James and then I was racing with Stuart and Dan.”

The PBM Kawasaki man fought hard with Dan Linfoot in the closing stages of the second race, a battle he says he thoroughly enjoyed.

“The battles with Kiyo last year were so intense because of what was at stake but this was the start of the season! To have a good old-fashioned ding dong with Dan, who is young and keen, reminded me a lot of how I raced with Alex in 2013.

“Dan rode really well and I just wanted someone in front of me because every time I got in front I made little mistakes as I’m a little rusty, but now we can build off this and the PBM Kawasaki will only get stronger. I am only going to get stronger and fitter myself and I think we can be even stronger going into the next races and we will have a good plan for Brands Hatch.”

After qualifying, Byrne admitted to not being as sharp as he should be but this didn’t prevent him walking away from the first round as the championship leader once again.

“I was a little disappointed after qualifying as we were two tenths off but the reality is I should have only taken the plaster off my hand on the Thursday before this race so to leave with a second and first place I really can’t grumble. We have been working really hard this weekend to get a better feeling and now it is onwards and upwards.”