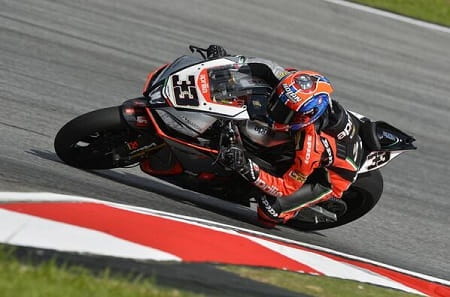 Marco Melandri stormed to double victory in the sweltering Malaysian heat as the Superbike World Championship visited Sepang for the first time in fourteen years.

In race one, Aprilia’s Sylvain Guintoli took the holeshot from pole position ahead of the satellite RSV4 of Toni Elias. Drama struck at turn two as Loris Baz tucked the front, wiping out the World Championship leader, Tom Sykes, who in turn wiped out Crescent Suzuki’s Alex Lowes.

The order settled with Guintoli in the lead ahead of Elias and Ducati’s Chaz Davies but Marco Melandri, keen to make good use of his Sepang experience, pushed hard to fight through the pack and had taken second by the third lap. Having made a strong start, Toni Elias began to slip down the order as Chaz Davies took third.

Having qualified on the third row, the first lap crashes helped Eugene Laverty’s race position but hard work from the Irish rider slip past Elias into fourth on lap nine. Race leader Sylvain Guintoli went wide at the final turn allowing Marco Melandri to slip past going into lap eleven. Laverty took third from Chaz Davies on lap thirteen in a move that would decide the race order, with Frenchman Guintoli unable to get back passed team mate Melandri. Chaz Davies crossed the line fourth with Toni Elias fifth. David Salom took the EVO spoils ahead of an injured Leon Camier. 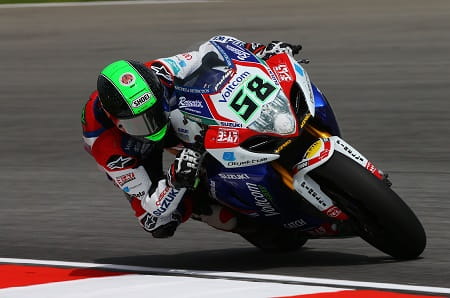 Guintoli got the holeshot once again in race two ahead of Toni Elias and Sykes third. Race one victor, Melandri fought past Tom Sykes into lap three. Red flags were then drawn as Claudio Corti’s MV Agusta blew up, leaking oil on the track.

A quick restart procedure saw Toni Elias shoot into turn one in the lead for a ten lap dash, ahead of the Aprilias of Melandri and Guintoli. Guintoli managed to make it through the pair into the lead, with Melandri was soon challenging Elias and a tough move saw the Italian push both riders wide, allowing the Kawasaki pair of Sykes and Baz through.

As the fastest man on track, it didn’t take Melandri long to fight back through to second, comfortably passing Sykes on lap five to begin chasing down his Aprilia team mate. Melandri leaves it until the last lap to make his move, a block pass didn’t work for the Italian running him wide but wanting it bad, Melandri slipped up the inside heading into the back straight. Guintoli attempted to get past in the final turn but with Melandri’s line tight, the Frenchman was forced out wide. Sykes crossed the line third ahead of Elias with Loris Baz third. Leon Camier finished top EVO machine ahead of David Salom.