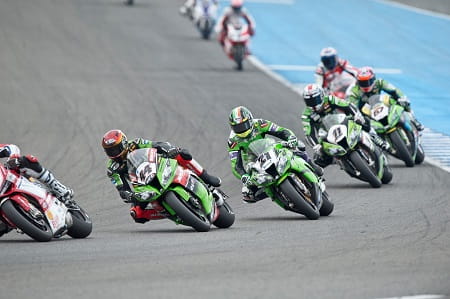 The 2014 World Superbike Championship has been a bit of a disaster for rights holders Dorna Sports. The Spanish firm bought the series, which was once one of the most popular motorcycle racing championships in the world, from its previous owners last year and have since had to deal with the mess they’d left behind.

This was a mess that left the new organisers with three quarters of the 2014 season completed by mid-July, with an almost two month-long summer break and subsequently just one round per month until the season would end in Qatar this weekend.

Two rounds were dropped mid-season, including the Russian round cancelled on supposed ‘political grounds’ and what was meant to be the penultimate round in South Africa also receiving the chop after a few financial issues preventing the circuit from meeting safety homologation requirements.

Next season, Dorna is expected to begin its turnaround of the championship and the first of many changes will include a heavily revised, extended calendar that takes Superbike further than it has ever been before.

World Superbike organisers added Qatar and Malaysia to the calendar for the 2014 season but next year the series is expected to branch out to South America and further into Asia with the addition of rounds in Chile and Thailand.

It’s thought Dorna is using the series to try out such venues ahead of them hosting rounds of the MotoGP World Championship in future years.

As proposed for 2014, the 2015 calendar will feature 14 events and many of the circuits are already confirmed. The season is expected to get underway at Phillip Island on 22nd February with the Thai round soon after to avoid the month-long wait faced between the first and second rounds in previous years.

Laguna Seca will once again feature on the calendar in mid-July and Magny-Cours will host the final European round of the season after signing a deal to do so until 2020. Donington Park is expected to be the sole British round of the series.

Despite promises the South African round would take place next year, it looks as though that might not happen and despite World Superbike’s previous owners signing a lengthy contract to race at Moscow Raceway, the series returning to Russia looks unlikely after Russian promoter, Yakhnich pulled out of the series earlier this year.

Another round in doubt is Portimao, the Algarve circuit has been struggling financially for a number of years and would require a significantly reduced sanctioning fee to continue hosting a round of the championship.

It’s expected a provisional calendar will be released at some point during this weekend’s World Superbike Season finale in Qatar.

However, with just a handful of riders signed up for the 2015 season so far, it’s not just the calendar we’re awaiting news of.