Brits on top in Portimao 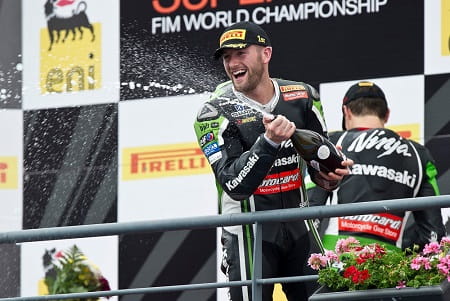 Tom Sykes increased his championship lead in the eighth round of the Superbike World Championship at Portimao yesterday despite finishing just eighth in the second race.  The 2013 World Champ won the first race but couldn’t hold the pace in the wet second outing, won by PATA Honda’s Jonathan Rea.

After a mid-season dip, Rea had been strong all weekend at Portimao and it was the Ulsterman who shot into the lead at the start of the first race ahead of Marco Melandri and Tom Sykes. Sykes on the Kawasaki got the best of Melandri on before the pair passed the leading PATA Honda on the back straight on lap four.

Loris Baz took second from Aprilia’s Melandri on lap eight with Rea not far behind the pair. Frenchman Sylvain Guintoli battled through the field after a poor start to join the podium fight, with the Frenchman and his team mate passing Loris Baz for second and third respectively on lap twelve.

Shortly afterwards, rain began to fall and Tom Sykes’ lead dropped. Several riders were caught out by the conditions, notably Chaz Davies and Leon Haslam who crashed out of the battle for sixth. Fortunately for Sykes, who often opts for the more cautious approach in wet weather, the sun re-appeared and he was able to maintain his lead to the line. Guintoli took second for Aprilia but Loris Baz maintained his strong performance so far this season, taking Melandri for second place towards the end of the race. Kawasaki’s David Salom took the EVO victory in ninth place. 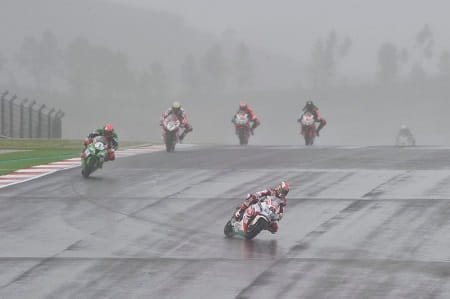 Jonathan Rea took the holeshot once again second time out, although this time with the rain lashing down the PATA Honda man was determined to stay in front. Not looking back, Rea powered ahead as Sykes, Davies and the Aprilias engaged in battle for third place. Melandri and Guintoli passed the Ducati of Davies for third place on the fifth lap.

By lap seven, Rea had a lead of four seconds over championship leader Sykes, as a three way battle for fifth between Davies, Giugliano and Haslam ensued. Sykes lost third place to the Aprilias on lap nine and then the Brit was taken for another place as Giugliano shot into fourth.

Upping the pace, Marco Melandri began to reel in the race leader but his chances were cut short after a collision with his team mate, Sylvain Guintoli, brought the pair to the floor. Airing on the side of caution, Sykes began to drop further back as the battle for third intensified between the Huddersfield man, Leon Haslam, Alex Lowes and Chaz Davies. Rea took victory comfortably ahead of Ducati’s pairing of Davide Giugliano and Chaz Davies with Alex Lowes taking fourth. Sylvain Barrier took the EVO victory.