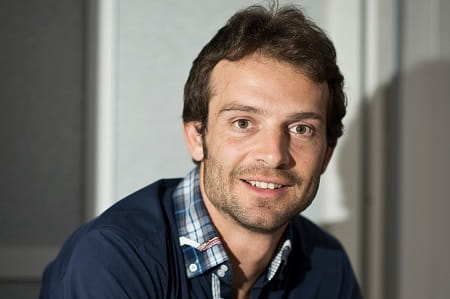 2014 World Superbike Champion Sylvain Guintoli has signed a deal to ride for the PATA Honda team next season after clinching the title in a close season finale in Qatar.

The move will be the first time a reigning World Champion has defended their title with another manufacturer since Carl Fogarty defected from Ducati to Honda for the 1996 season.

Guintoli will be re-united with former sponsor PATA, for whom he took two victories in the 2012 season. The Italian firm offered the Frenchman a lifeline after he lost his ride with the ill-fated Effenbert Ducati squad half way through the year.

Despite a wealth of experience in World Superbikes and the Grand Prix paddock, Guintoli has never ridden for Honda before but is relishing the new challenge.

“The events of this season and especially last night are still buzzing in my head, but I’m delighted to be joining the Honda family and to be reuniting with Pata” said the Frenchman. “The last time we worked together was a very unexpected but successful partnership. I brought Pata their first victories and we have a strong relationship.

“I’m looking forward to tackling this new challenge and I can’t wait to get going. Johnny [Rea] has obviously been strong on the Honda all season, and sometimes he’s been very strong! So I think there is definitely a big potential with the bike and I think the new rules for next year will suit it. So for us this is good news and I can’t wait to understand how it works; but it looks like a really good package and I’m looking forward to getting the first impressions soon.”

Guintoli joins Michael van der Mark in the squad in place of Jonathan Rea, who is expected to move to the official Kawasaki team.