Too much to lose for Sykes at wet Portimao 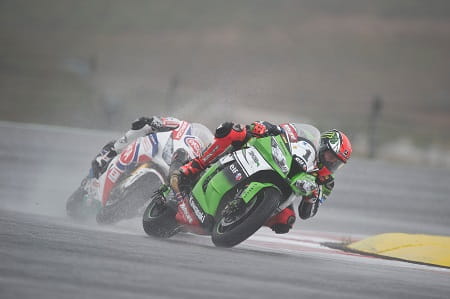 Tom Sykes has said he was reluctant to push in the second World Superbike race at Portimao this weekend as he was having a few issues with his bike and there was ‘too much to lose’. The 2013 World Champion took victory in the first race but could only manage eighth place in the wet, second outing despite running as high as second early on.

Despite scoring his worst finishing position this season in the second race (not counting the race in which he was punted off by his team mate in Sepang) Sykes extended his championship lead over Sylvain Guintoli to 43 points. With just five rounds remaining, he is clear favourite to retain his title this season and acknowledging this, Sykes took it slightly easier in the second race in Portugal to avoid any unnecessary loss.

“I had a poor start in race one and it is a long race round here, long enough race to make some corrections” said Sykes.  “I am happy because we had a good gap then the rain started to come. When you are leading the championship and leading the race you do not want to do anything stupid and it was very difficult to calculate the levels of grip because in some parts of the circuit it was raining more heavily than in others.

“The team gave me great pit board signals and luckily the cloud disappeared with a good amount of laps left, to go so I could take an advantage again. In the wet conditions of race two we had some issues but I cannot be disappointed because we have shown great potential. Sometimes we are dealt these strange races and there was too much for me to lose today. Some other riders made mistakes and so I extended my championship lead compared to when we arrived here.”