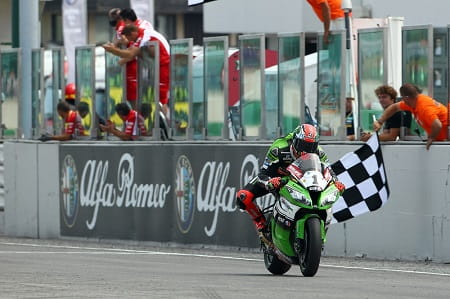 Taking double victory this weekend in Misano, Tom Sykes is beginning to make his mark in the World Superbike history books. The double triumph marked the 28 year old’s twentieth victory in the Superbike World Championship.

While taking Fogarty’s record is quite a way off, Sykes looks set to overtake some real Superbike greats by the end of the season. Just two more victories would see him surpass Max Biaggi’s win tally and he’ll overtake Carlos Checa should he bag five more wins out of this season’s remaining twelve encounters. Mathematically, he could become the fifth most successful rider in series by the end of this season should he bag eleven wins but with the high level of competition, the Kawasaki man might have to wait until next year for that one… 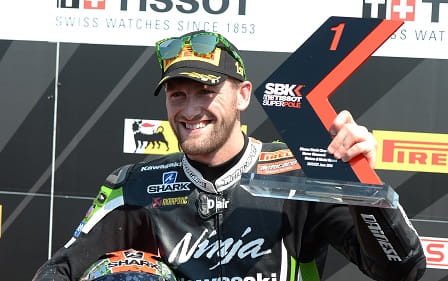 It’s not just the all-time winners list Sykes is climbing up either. After taking nine pole positions in 2012, followed up with another eight last season he’s become known as the modern day King of Superpole. Sykes started from pole for the 21st time this weekend in Misano, equalling Carl Fogarty’s tally to secure third on the list of all-time polesitters behind Aussie legends Troy Corser and Troy Bayliss. Beating Bayliss’ tally isn’t mathematically impossible for 2014, but it’d mean Sykes taking pole in each of the remaining six races.

With a commanding championship lead of 39 points, the Brit is the clear favourite to take the title again this season. This feat would see him become the first rider to win back-to-back Superbike titles since Carl Fogarty in 1998/1999 and just the fourth rider in history to successfully defend the title. He’d be the ninth rider to take the crown more than once and the third Brit to do so after Carl Fogarty and James Toseland. Championship victory for Sykes would also see Britain become the joint-most successful nation in the Superbike World Championship.

Sykes has made it clear he has no intentions of moving to MotoGP unless he can do so on a front-running motorcycle, so chances are he’ll be in World Superbikes for a while. He’s at the top of his game at the moment and showing no sign of slowing, can he become the next Superbike great?