Sykes lashes out at Baz for ignoring team orders 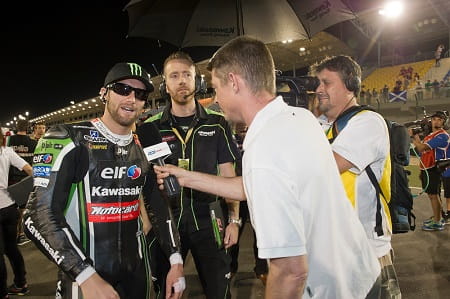 Tom Sykes has lashed out at Loris Baz on social media after the Frenchman ignored team orders to allow the British rider past in yesterday’s first race in Qatar.

Heading into Qatar, Tom Sykes led the World Superbike Championship by 12 points but with his title rival Sylvain Guintoli winning the first race, his lead was reduced to a mere 3 points ahead of the final outing. Had Baz, who finished second ahead of Sykes in third, let his team mate past the gap would have been 7 points meaning the Kawasaki man would have only had to sit behind Guintoli in the second race to clinch the crown.

Another third place for Sykes in race two saw him lose out on the championship as Guintoli took the win.

After the race, Baz tweeted: “About team orders, at least I’ve helped him once in my life! In Magny Cours, not sure he can say the same!” He also added in a TV interview that he’d only help someone who had been “nice to him.” The Frenchman had let Sykes past following a team order in Magny Cours.

Baz and Sykes have had a fractured relationship in the Kawasaki team this year, going back to an intense battle between the duo for the win at Donington. Later in the season a mistake from Baz saw Sykes wiped out of the second race in Sepang, an incident which saw the Brit suffer an injury to his hand.

This morning Sykes has hit back at Baz’s decision not to let him past in Qatar.

“Great words big mouth! Yes you helped me in Magny Cours but my data and settings helped you when you joined Kawasaki" said Sykes. "‘Team orders’ are orders given to you by the team and not me. The team and manufacturer that gave you everything.

"These team orders were probably given to you from the mess you created in Sepang for the Team & Kawasaki, but like always your ego is too big to see the needs of the team. You showed no respect to the orders of the team. Anyway I wish you luck for next season and congratulations for your 5th place this year, you must be proud.”

Baz will move to MotoGP in 2015 to race with NGM Forward Yamaha. Sykes remains with Kawasaki in the World Superbike Championship.