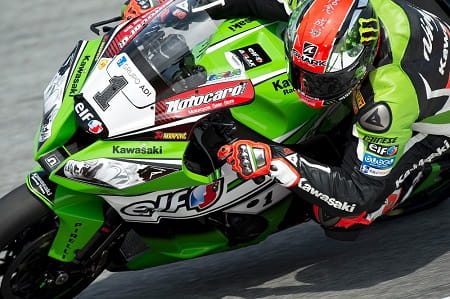 Tom Sykes extended his championship lead today in Misano, storming to a dominant double victory ahead of his team-mate, Loris Baz.

It was Toni Elias who took the hole shot following a rocket-ship start from the second row of the grid; the luminous yellow Aprilia leading the way from Tom Sykes and Sylvain Guintoli. Loris Baz barged his way into second place at the second corner before things began to fall apart for Toni Elias. Sykes put in a move on the Spaniard on the back straight with Baz then lining him up as they went into lap two. The Red Devils Aprilia man then went wide losing out on further positions and lost even more as he overshot at turn one.

It was clear Sykes was on a mission, as he broke Carlos Checa’s 2012 lap record on lap three, pulling a comfortable gap on his team mate from there on in. Unable to put anything together to challenge the Kawasaki duo, Marco Melandri settled into third place ahead of a battle for fourth between the second Aprilia of Guintoli and Ducati’s Chaz Davies.

It was bad news for Crescent Suzuki’s Alex Lowes as he crashed out on lap fifteen. Chaz Davies had passed Sylvain Guintoli for fourth and began chasing down his former BMW team-mate, Marco Melandri but was unable to eat enough into the gap towards the end of the race. 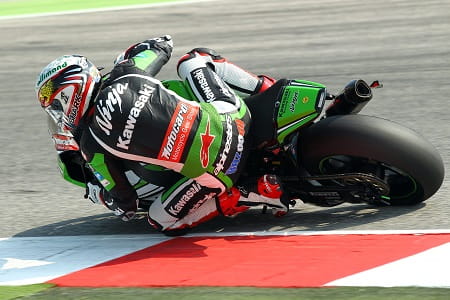 Ducati’s Davide Giugliano got the holeshot in race two, although it was all too good to be true for the Italian as the boards came out to say he’d jumped the start. The Ducati man entered the pits leaving Tom Sykes in the lead once again, in prime position to pull away exactly as he did in the first of the day’s encounters. It was again Loris Baz in second place, ahead of Sylvain Guintoli in the early stages before Melandri took over.

Baz didn’t have as easy of a time of it in the second race with the Aprilia’s hounding him throughout as Sykes pulled away. With only the Ducatis able to run a pace that resembled anything like that of the leaders, when Chaz Davies fell on lap five the gap between the leading quartet and Jonathan Rea in fifth was some ten seconds.

With Guintoli dropping off in the latter stages, it was Melandri versus Baz for the runner-up spot. Melandri left it until the nineteenth lap to make his move but a determined Loris Baz shoved it straight back underneath the RSV4. Another attempt by the Italian was also thwarted by Baz, who gave the Aprilia man no choice but to settle for third at the end of the race. Jonathan Rea came home fifth ahead of Toni Elias with Eugene Laverty eighth, riding with a broken foot.