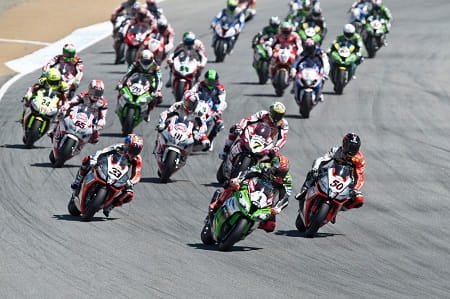 The Superbike World Championship will be yet another round shorter for 2014 as it has been confirmed that the penultimate round scheduled to take place at Phakisa Freeway, South Africa on October 19 has been cancelled.

Work was scheduled to get underway at the Welkom circuit to bring it up to a standard fit for the FIM's homologation requirements but soon met delays as the Free State Tourism Authority formalised their additional funding requirements to host the event.

Organisers say they are working for a solution which will hopefully see the circuit host an early round of the 2015 championship, possibly in March.

A statement from the event’s promoter, GAS Sports reads:
“Despite GAS Sports best efforts and significant investment in the planning for the 2014 WSBK event, works at Phakisa Freeway required for the FIM's homologation had to be halted while the Free State Tourism Authority, the custodians of Phakisa Freeway, formalised their additional funding requirements to enable South Africa's hosting of this prestigious World Championship event,” said Sivile Mabandla, GAS Sports Chairperson. “GAS Sports will continue to work with FSTA and other invested private and public stakeholders in an effort to secure an early date with Dorna, the WSBK rights holders, in the 2015 Superbike World Championship.

“While we are naturally disappointed the 2014 event will not be possible, we must thank the Free State Government for their efforts to date to support and host the event. We have had sight of their funding applications and know that the event is highly regarded and well supported by all stakeholders. We look forward to a favourable resolution to secure an early date in next year’s WSBK calendar.”

The South African round is the second to be cancelled this year after Russia’s round, set to be held in Moscow, was cancelled on political grounds.

World Superbike bosses say they are lookingat options for a replacement venue.

There are now just three rounds of the 2014 Superbike World Championship remaining as Tom Sykes leads the title chase by 44 points.