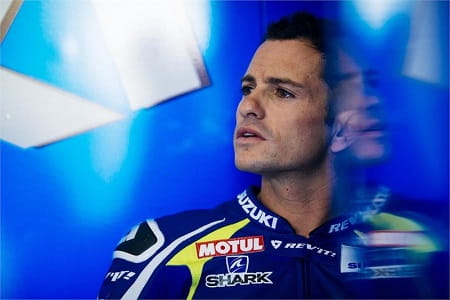 Former MotoGP star Randy de Puniet will move to the World Superbike Championship next season as he joins the Crescent Suzuki outfit alongside Briton Alex Lowes.

The Frenchman took a hiatus from racing for 2014 as he became Suzuki’s official test rider, developing the all-new GSX-RR that the Japanese marque will return to MotoGP with next season.

With Aleix Espargaro and Maverick Vinales joining Suzuki for their Grand Prix return in 2015, de Puniet will continue in his role as test rider alongside his World Superbike duties.

He replaces Eugene Laverty in the Dorset-based Crescent squad, the Northern Irishman MotoGP bound with Aspar Honda for 2015.

“I’m so happy to be joining Crescent Suzuki for the Superbike World Championship because my target for 2015 was to get back to competing on the race track" said de Puniet. "Testing for the past year was ok but of course what I really want is to race! I really enjoyed racing in Suzuka this year - to race, to fight and to be on the podium is everything to me. I had the opportunity to join the Crescent team for next year and I’m really happy; my first priority was to stay with Suzuki because I want to stay within this family, and for me this is a new challenge – a new championship, new bike, new tyre, everything is different and I have many things to learn but I am ready for that and I’m very confident. I will be joining a very strong team with a lot of experience and I think the bike will be good next year. We have a good test plan for this winter and I think we will be ready for the first race in Phillip Island next year.”

Before moving to World Superbikes, de Puniet will join Suzuki for the race debut of the GSX-RR as a wildcard entry in the final round of the 2014 MotoGP season in Valencia.