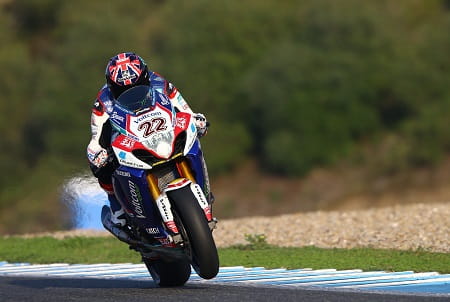 The 2014 racing season may not long be over but preparations are already underway for next year. A number of world superbike teams were in Jerez this week for a four day test, including Kawasaki, Honda, Red Devils Aprilia and Crescent Suzuki.

Reigning World Champions Sylvain Guintoli and Michael van der Mark were given a first taste of the Honda CBR1000R Fireblades they’ll compete aboard next season with the PATA Honda team. The pairing used the weather interrupted four days to familiarise themselves with their new machinery. Guintoli hadn’t ridden an inline-four since his time with Suzuki in 2010 and van der Mark steps up to the Superbike class for the first time. van der Mark led the pair on the timesheets in 7th place, Guintoli was 8th. 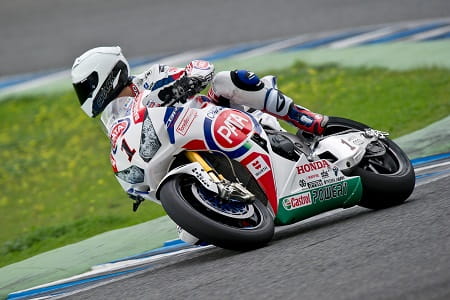 The test also saw Leon Haslam’s first spin on the championship-winning RSV4 with the Red Devils team, with the former race winner setting the fourth fastest lap time. He was joined by Michel Fabrizio who looks set to join the Briton in the Italian outfit next year.

After a quick shakedown at Aragon last week, Jonathan Rea enjoyed his first test aboard the factory Kawasaki ZX10-R. As many expected, it doesn’t look like he’ll be slow either. Rea set the second fastest time of the four day test, just a fraction slower than quickest man Alex Lowes. 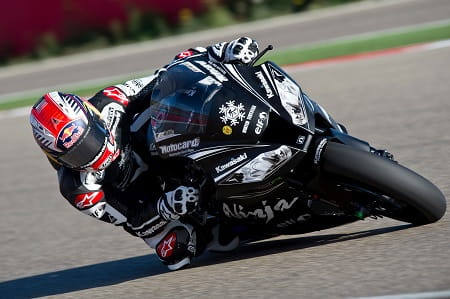 Remaining with the Crescent Suzuki team for 2015, Lowes set a fastest time of 1’40.730 to top the timesheets as he looks to improve on a tough rookie campaign. Joining him in the Paul Denning-run outfit is MotoGP exile Randy de Puniet. It took the Frenchman a couple of days to get used to the GSX-R superbike but by the end of the test he was just over half a second from his younger team mate’s time.

Britain’s Leon Camier tested the MV Agusta F4 RR he’ll campaign in the World Series next season after missing out on a MotoGP seat. He rounded off the time sheets in 9th.

Ducati’s Davide Giugliano and Chaz Davies were also present although no lap times were provided by the team, unofficially the pair were placed fifth and seventh respectively.