Laverty & Guintoli take victory down under 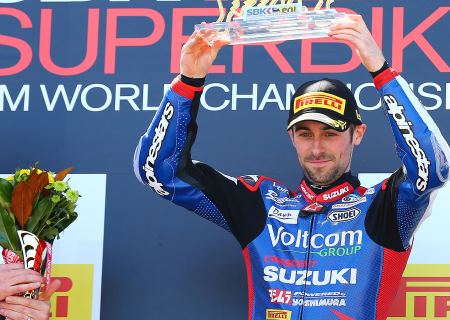 Eugene Laverty silenced those questioning the competitiveness of the GSX-R1000 this weekend as he stormed to Suzuki’s first World Superbike victory in over ninety races. It had even looked as though the Irishman could have taken the double after faring strong in the second race, but it eventually went to Aprilia’s Sylvain Guintoli.

It was Guintoli who took the lead at the start of the first race too, in a style reminiscent of last year at Phillip Island. The Frenchman was chased hard for the first half of the race by team mate Marco Melandri and Ducati’s Davide Giugliano, who became embroiled in a fierce battle for second place. An eight-wheeled battle for fourth place was the focal point of the first ten laps, between World Champion Tom Sykes, his team mate Loris Baz, PATA Honda’s Jonathan Rea and Suzuki’s Laverty, who had recovered after a tough start.

It was Laverty who would eventually break free of this battle, increasing the pace to reel in the leaders one by one. With Giugliano and Melandri tripping one another up, Laverty passed the Italian duo with relative ease before chasing down Guintoli at the front, passing the Frenchman on lap seventeen. A battle between the Aprilias and his increased pace saw Laverty build a large enough gap to comfortably take the win ahead of his Aprilia replacement Marco Melandri, who got the better of Sylvain Guintoli in the last couple of laps. 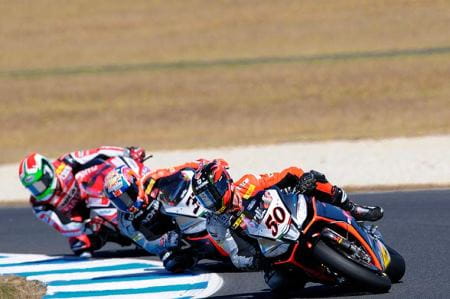 Marco Melandri took the hole shot in race two ahead of Guintoli who took the lead on the second lap with Eugene Laverty, Davide Giugliano and Loris Baz in tow. After a better start on his Suzuki GSX-R1000, Laverty looked to be in strong contention for double victory when he took the lead on lap eight, Guintoli fought back though, regaining the lead on lap twelve. After a tough start and having to fight through the pack, World Champion, Tom Sykes began to close the gap to the front.

Marco Melandri ruled himself out of the running just after mid-distance, overshooting himself at the Honda hairpin and ending up on the gravel. With battle ensuing at the front between Laverty and Guintoli, Sykes was closing in at a rapid pace when drama struck for Crescent Suzuki as Laverty’s GSX-R1000 blew up ruling him out of the race.

It had looked as though Laverty’s blow up hadn’t contaminated the track, with Baz and Sykes directly behind him as it happened. The fight continued with the Kawasakis looking strong but a lap after Laverty’s blow up the red flag came out awarding Sylvain Guintoli with victory from Loris Baz and Tom Sykes.