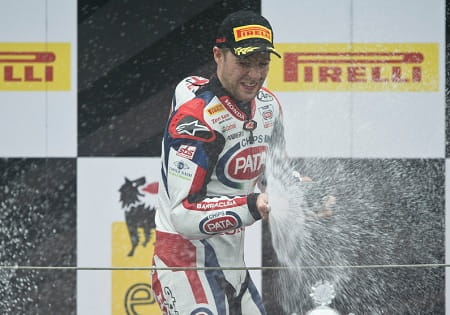 With the Assen round of the Superbike World Championship being held in April, tricky conditions have plagued riders for the last three years and 2014 was to be no exception. The rain came down just as the top riders in Superpole 2 were going out for their hot laps, curtailing the efforts of all but two riders to stick in a fast lap before the showers came. This would mean that Loris Baz started from pole position ahead of Sylvain Guintoli and Tom Sykes.

Despite light rain ahead of the first race, the twenty-one lap battle remained dry with Sylvain Guintoli bolting out of the starting blocks on his RSV4 to build a five second lead early on. Davide Giugliano was an early faller as the battle for second behind Guintoli ensued between Jonathan Rea and the Kawasaki pairing of Baz and Sykes. Sykes broke through to chase down Guintoli, only to run wide and slip back to fourth position. The Huddersfield man battled back past his team mate and Jonathan Rea and went on to chase down Sylvain Guintoli again. However the red flag brought a premature end to the race after Geoff May’s EBR had leaked oil on the track meaning Aprilia and Guintoli took victory over Sykes ahead of Jonathan Rea in third. Loris Baz took fourth sport with Toni Elias and Marco Melandri in fifth and sixth respectively. Niccolo Canepa took the top EVO spoils. 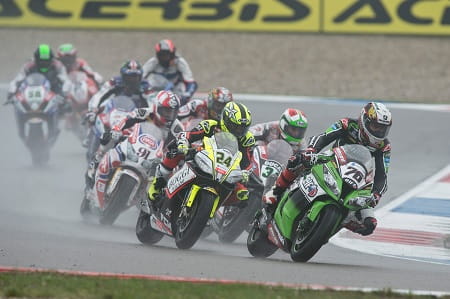 As riders headed out on their sighting lap for race two, the heavens opened and the grid was hurriedly cleared back to pit-lane. The race was then started shortly afterwards, in incredibly wet conditions. Guintoli took an early lead but after just four laps the Frenchman was gesticulating to race control to stop the race with visibility at practically zero. The race was sensibly red flagged and riders returned to the pits to await the restart. However conditions would only get worse and it began to look as if the race would be abandoned. After an hour, the rain started to slow and the rider safety commission along with race direction made the decision to attempt a restart.

Jonathan Rea took the lead in sodden conditions, looking extremely comfortable aboard his PATA Honda CBR1000RR Fireblade although keen for a double victory, Guintoli was in tow. It wasn’t meant to be for the Frenchman though, as he high-sided from his RSV4 at the Geert Timmer chicane. This left Rea with a comfortable lead but Davide Giugliano and Alex Lowes were fighting through the pack at impressive pace. Fortunately for Rea, a race distance of ten laps saved him as he crossed the line 2.2 seconds ahead of Lowes in second place with Giugliano third. Tom Sykes was a further 9 seconds back followed by Leon Haslam, Marco Melandri and Loris Baz. Sylvain Guintoli remounted and managed to climb up to ninth place. Niccolo Canepa once again took top EVO machine in tenth place.