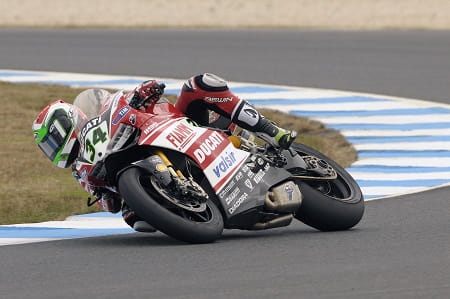 Davide Giugliano topped the timesheets at this week’s private World Superbike test at Jerez. Seeing Ducati on top of a World Superbike timing sheet with all other top teams present is a welcome change, after the Bologna factory suffered a dismal year in 2013 in a series they are known for dominating.

Giugliano’s time, set on qualifying tyres was a good half second under Eugene Laverty’s 2013 pole lap and just one rider present at the test could get anywhere near him, Loris Baz. The Frenchman set a time just one tenth slower than the Italian, with everyone else at least half a second back lead by Jonathan Rea in third place ahead of Giugliano’s Ducati team mate, Chaz Davies.

Aprilia’s pairing of Sylvain Guintoli and Marco Melandri set the fifth and sixth fastest times respectively ahead of Phillip Island Race 1 victor, Eugene Laverty. Leon Haslam set the eighth fastest time ahead of Alex Lowes, who is recovering from a broken ankle. David Salom rounded out the top ten as the only EVO bike present.

World Champion, Tom Sykes was present at the test but not included on the unofficial timings, although the World Superbike website has said the Yorkshireman actually set the third fastest time behind team mate, Loris Baz.

On topping the timesheets, Giugliano commented: “We’ve carried out many electronic and suspension tests that have allowed me achieve solid results on a track that wasn’t in the best condition as far as grip was concerned. The key thing is that, aside from the fast time, we’ve had chance to get back on the bike after a month and I’ve immediately regained the trust with my bike. I’m confident because every time I get on the Panigale we make significant progress. The team spirit is also fantastic and my technicians always give me what I need.”

All fastest times were recorded on the second day of the test with the third and final day being a wash-out. Riders were also joined on track by Ducati’s MotoGP team.