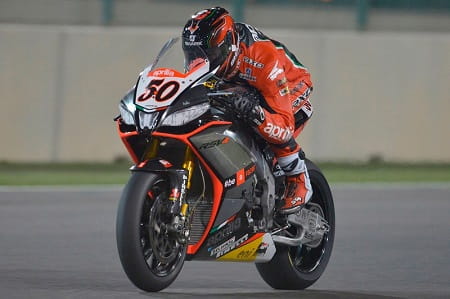 Sylvain Guintoli has been crowned 2014 World Superbike Champion after a faultless performance in Qatar saw him take the double victory to beat Yorkshireman Tom Sykes to the title.

Having out-qualified his rival, Sykes took the holeshot in the first race but it wasn’t long before Jonathan Rea took the lead. A rapid Loris Baz soon passed both riders and began to pull a lead. At the mid-point, Guintoli took third from Rea before passing Sykes and then chasing down Baz for the lead. Rea slipped off the pace towards the end of the race, as did Sykes who momentarily lost out on fourth place to Marco Melandri.

Sykes soon re-grouped and found himself in third position on the tail of team mate Loris Baz. The Kawasaki team ordered Baz to drop a position and let Sykes past but the disgruntled Frenchman ignored the request. Rea finished fourth ahead of Giugliano and Toni Elias. Guintoli’s 25 points reduced Sykes’ lead to just 3 points, meaning the winner would take all in the second floodlit race.

Sykes once again took the holeshot, leading for the first two laps before Honda’s Jonathan Rea slipped into the lead at turn one. Having made a steady start, Guintoli fought through to third position on the third lap before making his championship-winning overtake a lap later.

Once at the front Guintoli put the hammer down, setting a new lap record of 1:57.9, pulling a strong gap on his rival. Sykes had problems other than watching his championship slip away though, Jonathan Rea fought hard to re-take second from the Yorkshireman in the closing stages, a result that saw him clinch third in the title standings from Marco Melandri who finished fourth. Chaz Davies ended the season with a fifth place with Toni Elias once again completing the top six. Loris Baz finished seventh after being punted off track by Davide Giugliano in the early stages.

Guintoli’s win saw him take the title from Sykes by six points.