Dominant double for Rea in Imola 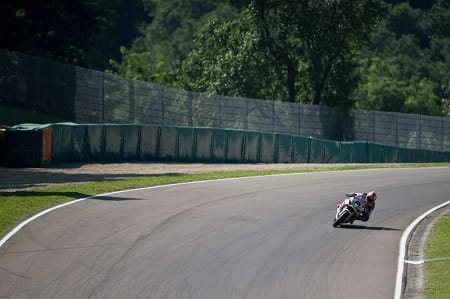 Jonathan Rea stormed to a dominant double victory this weekend in the fourth round of the 2014 Superbike World Championship at the iconic Autodromo Enzo e Dino Ferrari, Imola.

Starting from pole position, the PATA Honda man shot off the line in both races to lead majestically from start to finish, clinching his second and third wins on the bounce following victory in the second race at Assen.

Rea was followed by Aprilia’s pairing of Marco Melandri and Sylvain Guintoli early on, but Ducati’s Chaz Davies managed to stick it past both RSV4s and pull a gap strong enough to bag second, some 4.5 seconds behind race leader Jonathan Rea. Davies’ result marks his debut podium with Ducati and Ducati’s first dry podium since 2012. An intense battle ensued for third place between Melandri, Guintoli and Kawasaki’s pairing of Tom Sykes and Loris Baz. World Champion Tom Sykes secured the final podium spot on the second to last lap.

Once again in race two, Jonathan Rea shot off the line to clear off into the distance this time with Sylvain Guintoli and Davide Giugliano leading the chase ahead of Marco Melandri, Chaz Davies and Tom Sykes. As in race one, Davies fought through the pack on his Ducati 1199 Panigale to control the hunt for Rea, but was once again unable to match the Ulsterman’s pace. Sylvain Guintoli crossed the line in third while Loris Baz pipped team-mate Tom Sykes to fourth. 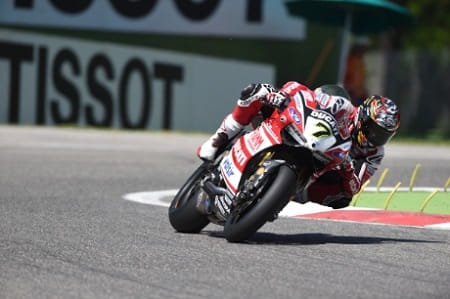 Rea’s dominance has catapulted him into the championship lead, four points ahead of reigning champion Tom Sykes. Leon Camier took the EVO honours in both races, despite Ayrton Badvoini’s Bimota crossing the line as top EVO bike in the second race. The Italian manufacturer is yet to meet homologation requirements and is unable to score points.

“I couldn’t have imagined doubling up coming here said Rea after his triumph. “But I knew we’d be strong because it’s a circuit I really enjoy and one that the bike goes really well at.

“It’s a shame we have a test tomorrow because I think everybody in the team deserves to go and really enjoy the night and savour this moment but it’s back to work tomorrow! We’ll try to make the bike better and go to Donington hopefully to keep this ball rolling. I’m really enjoying riding right now and I want to thank everyone who’s put the work in. Not just the track staff here but the guys back at base in Nieuwleusen [Netherlands].”