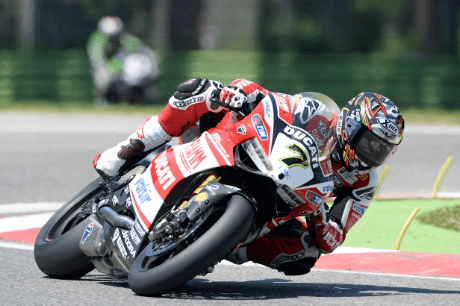 Chaz Davies has said he thinks the Ducati Panigale has a win in it after taking two second place finishes at Imola. The Welshman joined Ducati after BMW withdrew from World Superbikes at the end of the last year and the potential of the Bologna factory unknown after a dire year in 2013 with an injured Carlos Checa and Ayrton Badovini.

Davies’ results in Imola mark Ducati’s first dry podiums since 2012 and he says that things seem to be going in the right direction.

“The bike felt a lot better at Imola, it was what I’ve been looking for in the first few races” Davies told Bike Social at Donington.

“I had a bike underneath me that I felt I could ride hard and from the first lap to the last lap, it was working well! We had done a good job with the set up so it was a bit more like it. We were consistently competitive throughout the weekend and this enabled me to get a bit of confidence back which I was missing in Assen after not being able to push the bike as I wanted.”

This weekend the Superbike World Championship are at Donington Park for the only UK round of the series. Davies says he’s happy to be racing at home and enjoys the circuit, despite his previous superbike results not reflecting that.

“I really enjoy Donington, it’s a good track. It was one of the first major tracks that I rode. On smaller bikes I’ve always done well here but I’ve had a tougher time in Supersport and the last couple of years in Superbike. It’s just a matter of getting out there and seeing how we go but on paper it should be a pretty good track for Ducati so we’ll see.” 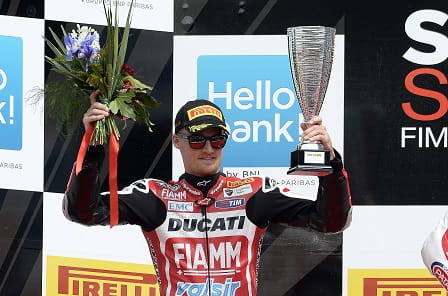 Davies is the first British rider to ride for Ducati since James Toseland, who took a World title for the manufacturer for the Italian marque in 2004. British riders have had incredible success with British riders, with Neil Hodgson also taking a world title aboard Ducati machinery and not forgetting the legendary Carl Fogarty, who stormed to four World Superbike titles with Ducati in the nineties. For 2014, Ducati has also returned to the fold of Feel Racing, who played a large part in Ducati’s World Superbike success.

“Ducati has proven to be a good home for British riders in the past with Foggy, Hodgson and Toseland! It’s good to be back with Feel Racing as well, there is a bit of a family atmosphere going on; it feels as if it’s where Ducati belong because of all the success they’ve had with this team in the past. It’s come together nicely and it’s nice to be able to give the guys something back with the results in Imola because they definitely deserve it after a tough last season and all the work that has gone in season.”

Davies is familiar with the Feel Racing outfit though, as they were the team behind the factory BMW outfit last year so much of Davies’ crew has remained the same.

“I think that any time you can stay with a familiar crew it is an advantage, it’s always a learning curve for the rider to learn all the mechanics and also the other way round for the mechanic too! It’s hard for a chief mechanic to learn what a rider needs and I feel that I have that connection with Morro now after working together for a couple of years.”

2013 marked Ducati’s first winless season in the Superbike championship since its inception in 1988 with many laying the fault at the feet of the new Panigale 1199. Davies says he thinks it’s a bike that can win though…

“I think the Ducati has a win in it, there are definitely still improvements to be found in the bike and even just extracting a few tenths out of the bike can make that difference. I’ll always find something to complain about as that’s my job. In Imola there were a couple of small limitations which without maybe we could have found some time to bridge the gap to Johnny or maybe not but there are definitely areas we can work on to try and improve it. All in all, I think the trend is going the right way. The bike has improved and I’m feeling a lot more confident on it.”

Davies, along with team mate Davide Giugliano, signed a two year deal with the Ducati Superbike team, something he says is nice to have in the back of his mind.

“It’s nice to have a two year deal because we all know what we’re doing next year and it’s a long term plan. This season started with modest expectations given last year’s results so it’s important to keep that in our mind but not also rest on a two year contract. Just because I’ve got two years doesn’t mean I can get away with dawdling around this year, it’s important to get good results. A lot of people speak about whether it will be EVO or not next year and whether it will suit our Panigale more. We have bridged the gap but I still feel there is more to come to bridge the gap completely to the four cylinders and it would be nice to show in full superbike-trim we can be competitive.”