Camier to return to World Superbikes at Aragon 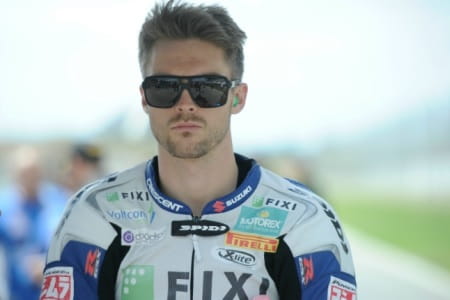 Leon Camier is set to return to the World Superbike paddock in the second round of the Superbike World Championship in Aragon. The twenty-seven year old has seemingly signed a deal with the BMW Motorrad Italia SBK EVO squad to replace the injured Sylvain Barrier, as we reported on Twitter yesterday.

Barrier has been ruled out of competition at Aragon after suffering serious injuries in a car accident near his home in southern France. The Frenchman was taken to hospital in Lyon where he was in a coma for just under two days. He remains in hospital although is thought to be on the path to recovery, with his family even suggesting the twice European Superstock Champion could be back on track as early as Assen (end of April).

It’s been a tough winter for Camier, who was left searching for a ride after being replaced in Crescent Suzuki’s World Superbike squad by Eugene Laverty. The twenty-seven year old managed to secure a deal to join the MotoGP paddock with IODA Racing, who were set to continue where Jorge Martinez’ Aspar team left off with Aprilia but this seemingly fell apart at the eleventh hour, despite no official announcement from the team only Petrucci was present at the season opener in Qatar and Camier was removed from a revised version of the FIM’s Grand Prix entry list.

Reports claim Camier could get a first taste of the S 1000 RR EVO machine at a private test in Italy ahead of the Aragon round set to take place between 11-13 April. The Brit will join the Italian-run team on a round-by-round basis until Barrier is fit for return but Italian sports daily, La Gazetta dello Sport is reporting that the squad, which first entered World Superbike in 2011, could run two machines upon Barrier’s return should they see fit.