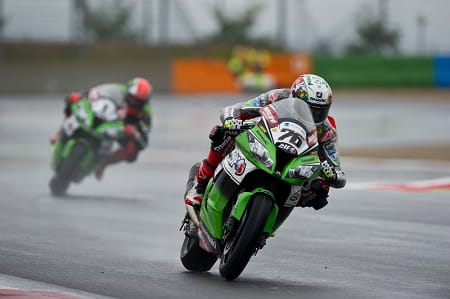 Loris Baz has defended himself against criticism for pulling over on the final lap of Sunday’s first World Superbike race in Magny Cours to allow teammate Tom Sykes to finish ahead.

Baz, who says in the early stages he thought he could win the race, was ahead of Sykes for most of the nineteen laps in a battle for fourth position. Marco Melandri was leading the race from Sykes’ title rival Sylvain Guintoli until an order from Aprilia saw the Italian rider give way to his teammate, prompting Kawasaki to tell Baz to allow Sykes past in order to limit the damage to his championship lead.

It had looked as though Baz would disobey the order, staying ahead of Sykes for two laps before sitting up at the final chicane on the last lap to give Sykes fourth place.

“It’s totally normal that I did that when the team asked me to” said Baz after the race. “I am where I am thanks to Kawasaki. They have done a lot for me in the past three years so I had to do that for Kawasaki.”

Baz will leave the Kawasaki Racing Team and the Superbike World Championship next season as he heads to compete in MotoGP with the Forward Racing outfit.