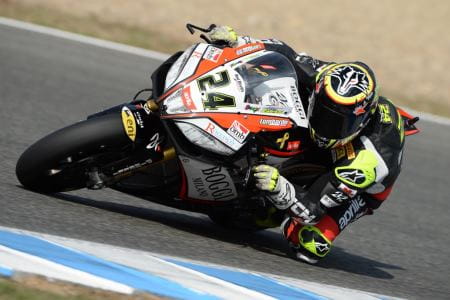 The provisional World Superbike entry lists have been released ahead of the season starting in just under a month at Phillip Island. Boasting twenty seven riders, this year the field is much healthier than the shrinking grids seen in years previous.

Champion Tom Sykes is set to run the number 1 plate this year, becoming the first Brit to do so since James Toseland in 2005. In total, seven Brits will compete in the series with Christian Iddon joining the field on the Alstare Bimota BB3 (although the bike is still subject to homologation).

Toni Elias appears on the list despite no official announcement having been made on his future in the series. The Spaniard joined World Superbikes from Moto2 at the Istanbul round last year, joining Red Devils Aprilia in place of Michel Fabrizio. Elias made an impressive debut and continued to impress until the end of the season, with it looking like the move to Superbikes could save his racing career after the former MotoGP race winner had endured nothing but misery since winning the inaugural Moto2 title in 2010.

Elias’ team, Red Devils Aprilia had said they would not be racing in 2014 citing a lack of funds; however it looks as though the Italian squad may have found a solution with Elias listed on the entry list under their banner. At this stage the list remains provisional, so there is a chance Elias may not line up at Phillip Island come 23rd February but at the moment, it’s looking up for the thirty year old.

Three manufacturers will join the grid this season, two with World Superbike history in the form of MV Agusta and Bimota (again, still subject to homologation) while Erik Buell Racing will enter the series for the first time, becoming the first American manufacturer to do so.

The final private European tests get underway at the end of February, ahead of the teams heading to Australia for an official test at Phillip Island on February 17-18 before the season kicks off 21-23 February.

Learn more about Superbike Insurance here. Or, to comment on this article  or !