WSBK heads to Magny Cours for penultimate round 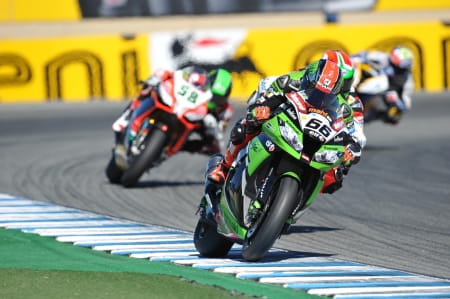 A dramatic Laguna Seca last weekend has set the scene for an explosive round of the World Superbike championship at Magny Cours this weekend. While it’s unlikely for one rider to take the title this weekend, it could give us a reasonable idea as to who will be lifting the trophy in three weeks at Jerez.

Tom Sykes currently leads the title chase by twenty two points, if he increases that by a reasonable amount at Magny Cours, he’ll be almost certain to take the title. However, Sykes hasn’t taken victory in a full-distance race since Imola back in June. With Eugene Laverty hot on his tail, having taken five consecutive podiums including three wins in the last four races, Sykes won’t have it easy.

Guintoli’s not out of it yet though… the Frenchman currently sits just one point behind his team mate in the championship fight after being displaced from second after two fifth place finishes at Laguna second. Guintoli hasn’t won since the first round at Phillip Island and has only had one podium in the last nine races. However, if there was one circuit for Guintoli to reignite his title fight it’d be at home in Magny Cours. Sylvain took a win and a third place at his home track last year and knows full well he ideally needs to stand on the top step twice this year.

In World Supersport, Sam Lowes looks set to win the title from Kenan Sofuoglu after missing out last time out in Istanbul. All in all, should be an exciting weekend!