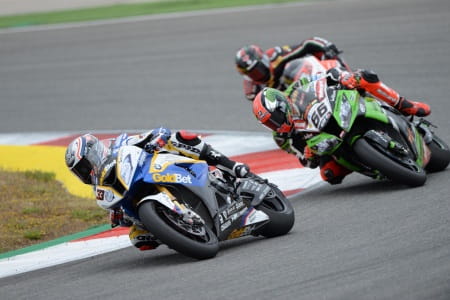 The World Superbike Championship heads to the historic Imola circuit this weekend for the seventh round of the series. Current leader Sylvain Guintoli has only finished off the podium three times so far this season, however hasn’t stood on the top step since the very first race back in Australia. He’ll be looking to maintain his healthy championship lead at a circuit where he’s never been particularly successful.

After falling on the sighting lap last time out at Portimao, Kawasaki’s Tom Sykes will be keen to make up lost ground as he now trails Guintoli by 23 points. Sykes finished on the podium twice at Imola last year and having only finished two races outside the top three so far this season (with the exception of a couple of DNFs) he’s certainly a favourite for the race.

Having taken the most wins this season, Eugene Laverty is keen to ensure he’s in a position to be in the championship fight. Laverty currently sits over 30 points behind the championship leader and with the racing as close as it has been, he’ll need a string of consistently good results to chip away at his team-mate’s lead. After dominating in the last race at Portimao, Laverty will be eager to return to his early season form.

BMW’s Marco Melandri will also be looking to impress, he’s another to have never taken a podium at Imola and after suffering with a rogue tyre in the second race at Portimao he’ll be keen to return to the top in front of home fans.

Double winner at Imola last year was 2011 champion Carlos Checa who – aside from what has become a one-off pole position at Phillip Island – has had a somewhat challenging season, currently sitting 13th in the standings. After achieving his best result this season so far last time out at Portimao (sixth), Checa will be keen to build on his previous Imola success and return to the sharp end.

Another veteran hoping for a return to the top this weekend is Noriyuki Haga, who is set to race in WSBK for the first time since 2011. The three-time runner up returns with the Grillini BMW squad for a wildcard appearance with potential for a long-term ride. After struggling in the British championship last year, the Japanese rider is somewhat of an unknown quantity.

In World Supersport, Sam Lowes will be looking to take his fifth successive win while the Mahi Racing Kawasaki’s of Kenan Sofuoglu and Fabien Foret are hot on his heels with ambition to knock the Brit off the top step for what would be just the third time this season.