Sykes re-signs for Kawasaki, who will take the second seat? 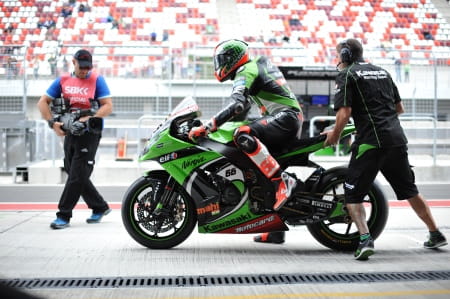 Tom Sykes has signed up for what is perhaps the best seat in the house for 2014 as he’s put pen to paper on a new deal with Kawasaki Racing that will see him campaign the green machine for the fifth consecutive year. Aside from how early the announcement has come, the deal surprises nobody. Sykes is one of best riders on the grid, perhaps the best and the Kawasaki is one of the best bikes on the grid and to break up the dream team that has been developed over the last three years or so with the new Kawasaki ZX10R would be a little silly.

The news comes in a week where all of a sudden the World Superbike silly season was set into motion with rumours of Nicky Hayden moving to the production based series for 2014 with Ducati (or perhaps another manufacturer). Earlier this weekend, rumours arose about Kawasaki’s 2014 line up and who would take the second seat alongside Tom Sykes; while the Sykes deal hadn’t been announced it was of course largely expected to happen. Marco Melandri allegedly told an Italian newspaper that he has entered talks with Kawasaki and Aprilia for 2014 as he is unhappy with BMW. Whether this is any more than Melandri firing a warning shot in BMW’s direction remains to be seen… With the Kawasaki being the best bike on the grid (i.e. the one that is winning but not having a tonne of technical problems) the second seat is going to be largely sought after. Further rumours in the paddock suggest Jonathan Rea is looking to break his career-long bond with Honda if he can’t get into MotoGP on a production RC213V. Our sources suggest the Northern Irishman would be happy to stay in World Superbikes (should a GP ride not materialise) but only on a winning bike – the Kawasaki is a winning bike. Whether the Japanese manufacturer would run team with two Brits (term used loosely) is less clear, if Melandri’s threat was serious and he moved to Kawasaki, Rea could be in line for the S1000RR.

Any deal of this nature would take a while to announce, if Melandri’s comments were a warning shot to BMW they could give the Italian what he wants. If he starts winning again perhaps he won’t leave but it’d take consistency, something you’d need a while to see… Jonathan Rea will have to wait to see if he can pick up a production Honda and that’ll take a while too. And like we’ve noted, it is early in the season and to be fair, Loris Baz hasn’t had an awful time of things despite a few nasty crashes. He has been on the podium this year and lies sixth in the championship, but it’s all too easy not to notice a mid-pack rider doing well when their team mate is setting the world on fire so maybe, there may not be a spare seat at Kawasaki after all? Although, with riders with the calibre of Melandri and Rea sniffing about his bike, Loris Baz will certainly be feeling the pressure.