Sykes does the double at Imola 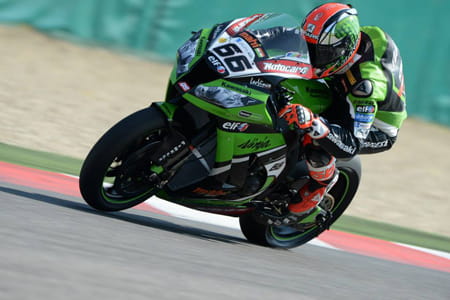 For the second time this year, Kawasaki’s Tom Sykes has won everything going at a round of the World Superbike Championship taking pole position, both race wins and the fastest lap at Imola.

Sykes, who is becoming an almost unstoppable force showed strong form – as always – throughout the weekend. Tom shattered the lap record in Superpole, only to have his lap cancelled as the red flag fell, halting the session. Having used his remaining qualifier, Sykes was left to set his time in Superpole 3 on a race tyre on which he went even faster than he had on the qualifier to take pole.

Despite local hero Davide Giugliano leading from the start, it didn’t take Sykes long to get to the front. Both he and Giugliano spent the first half of the race together, lapping over a second faster than anybody else on circuit. Championship leader Sylvain Guintoli retired from the race early on with a technical problem on his RSV4.

After a good start, Marco Melandri stalked Eugene Laverty who held third place for most of the race, the pair were later bothered by a rapid Jonathan Rea, who passed Melandri and then fell in pursuit of Laverty’s Aprilia. Melandri was close enough to make a pass for third on the last lap, however went a little wide and crossed the line in fourth.

In the second race, Sykes led into the first corner and didn’t look back. Giugliano once again followed but fell from his Aprilia RSV4 within the first three laps. Having had a much better start than race one, Jonathan Rea comfortably settled into second upon Giugliano’s departure.

Keen to make up for the blow-up in race 1, Guintoli settled into third and despite Melandri’s best attempts to stay with him, the Frenchman was too strong. Towards the end of the race, Melandri was caught by his team mate, Chaz Davies who made a move on the penultimate lap. Melandri regained the place on the final lap and as Davies tried to make a move at the last corner, he lost the rear. Fortunately the Welshman stayed on his BMW and crossed the line behind his team mate in fifth.

After his DNF in race one and Sykes taking the double, Guintoli has been displaced at the top of the championship table by the Englishman who now leads by six points.