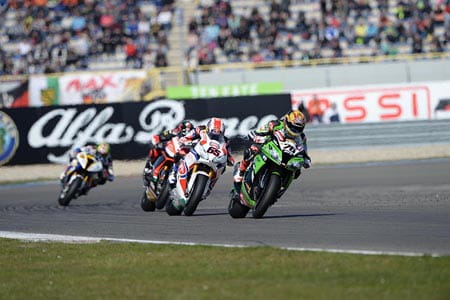 Britain’s Tom Sykes dominated the first World Superbike Championship race this weekend at Assen, giving Kawasaki its first race victory in seven years. Twenty-seven-year-old Sykes took advantage of his pole position to clinch the victory in what was a lonely race, having pulled out an incredible lead of 8.786 seconds over second place finisher and fellow Brit Jonathan Rea. Sykes’ win was his first of the season and his sixth victory of his career.

In the battle for second, Rea enjoyed a solid race and pulled out a last lap overtake on Sylvain Guintoli at the fast turn 13 kink to scoop the second step of the podium. Guintoli’s third place finish maintains his faultless top three record for the season. Eugene Laverty fought with both riders throughout the race, but struggled during the last few laps to end in a respectable fourth.

Meanwhile it was an unlucky weekend for BMW all-round. Chaz Davies started race one from the back of the pack, after not making the cut off for the sighting lap as a result of his bike being rebuilt after a morning warm-up crash. However, after some bold overtakes in the early part of the race, he fought his way up the field to finish seventh.

In race two, Sykes and Laverty battled it out for the top spot. Keen to taste the victory champagne for the second time, Sykes pulled out an early lead until lap 19, when Laverty calculatedly decided to make a move at turn six. However, Sykes hung on, finishing the race just 0.089 seconds behind the young Ulsterman.

Loriz Baz won the four-way battle for the third and final step of the podium, with Rea fourth and Davies and Guintoli rounding out the top six. After finishing ninth in the first race, Brit rider Leon Camier mimicked Davies’ ride from race one, riding from last place on the grid to finish seventh.