Decision on WSB future at Silverstone appears to be already made 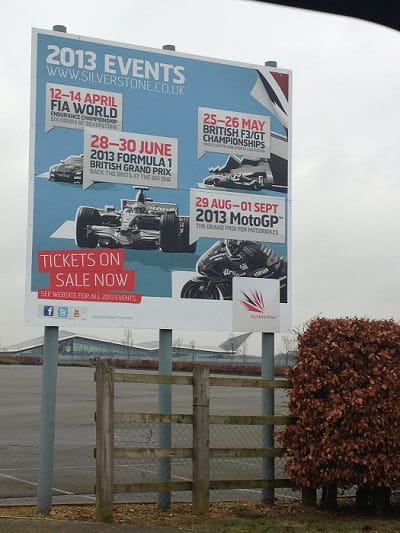 Silverstone has admitted they are involved in talks with WSB owners DORNA to cancel the UK round of WSB this year.

And if further proof was needed, this sign outside Silverstone circuit snapped by us yesterday shows that bosses at the Northamptonshire circuit may have already made their decision about the future of World Superbikes at the track.

Where F1 and MotoGP are being prominently promoted, this year's round of World Superbikes which is due to take place at the track on August 2 to August 4, didn't make it to the sign at the circuit's gate.

When questioned on the rumours that World Superbikes was being dropped from Silverstone's events calendar a spokesman admitted they were involved in talks with WSB's owners DORNA, and also that crowd attendance figures for World Superbikes has been dropping rapidly in the UK.

Donington Park will host the European round of World Superbikes at the Derbyshire circuit on May 24, 2013.