Rea and Baz spoil the party at Silverstone 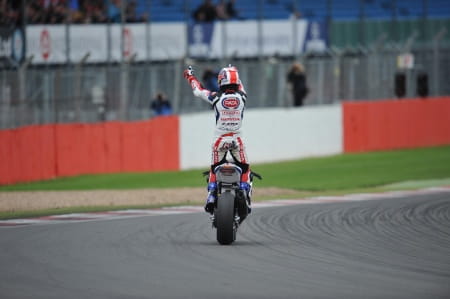 This weekend, at Silverstone, we were shown the true potential of the World Superbike Championship and treated to two superb and very different races. As can be expected when racing in the UK, the weather played its part, with the rain first causing issue in Superpole on Saturday. Well, we say rain… the final Superpole session was red-flagged with four minutes remaining, all times wiped and a wet session declared, just after Tom Sykes had posted the fastest ever Superbike lap around the British circuit. The only thing being… it wasn’t raining. Chaz Davies told circuit commentators he had three spots on his visor. So in the end, Superpole was decided in a twenty minute wet session, on dry tyres, on a dry track…

Rain seemed to be on the mind of the organisers a lot at the weekend, as the first race was delayed on Sunday, again for rain, despite riders saying there was none on the sighting lap. Rain did eventually come, however, half way through the race. Not much rain, but enough to give the field a good shuffle. Tom Sykes, for example, went from the race lead to eventually finishing eleventh as it became a game of who dares push hardest on slick tyres in the wet, wins.

The mental rain didn’t deter Jonathan Rea, who took advantage of his wary opponents to storm to the front and take his first victory of the year. Taking second behind Rea was Eugene Laverty and Leon Camier taking his and Crescent Suzuki’s first podium of the year.

The second race was dry and went on to be one of the most exciting races of the year with Loris Baz, both Crescent Suzukis, Chaz Davies and both Aprilias fighting for the lead. The race saw a total of four different leaders as the top six embarked upon a fierce fight for victory. Having led for four laps and been pushed back to third by Baz and Cluzel, Chaz Davies was ruled out as the engine blew on his BMW S1000RR. What was shaping up to be a great battle for the lead between youngsters Loris Baz and Jules Cluzel plus Eugene Laverty was brought to a premature end as the rain started to fall with two laps to go bringing several riders down, including second placed Cluzel. The race was red flagged and results put back a lap, meaning the podium would be Baz, Cluzel and Laverty.

It was an interesting weekend with interesting implications for the championship. For championship favourite, Tom Sykes, the weekend was just short of disastrous. Starting with the drama in Superpole which saw his pole position and lap record snatched from him, the Huddersfield man only managed to finish eleventh and seventh, meaning Guintoli’s lead was stretched (albeit slightly) to fourteen points as the Frenchman took two middle-ground points scoring finishes, fourth and sixth.

It was Eugene Laverty who capitalised from the weekend’s interesting events. Two podium finishes for him moves him back ahead of Marco Melandri in the championship standings. Italian, Melandri suffered a miserable weekend after a mechanical issue put him out of Superpole he only managed to bag two ninth places.

With World Superbike being as unpredictable as ever this season, no predictions can be made with six rounds and twelve races remaining… The series resumes in Germany, after the summer break, on 1st September.