Melandri and Laverty victorious at Portimao 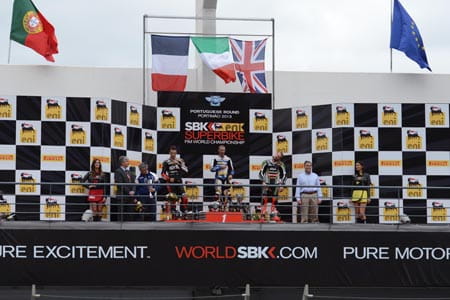 The sixth round of the FIM World Superbike Championship saw Marco Melandri and Eugene Laverty clinch victories at the Portuguese track of Portimao, but the first race of the day was an eventful one...

Sykes made good use of his pole position and was first off the line, while Laverty, Melandri, Sylvain Guintoli and Jonathan Rea were hot on his heels. However, unfortunately for Pata Honda rider Rea, his bike suffered mechanical problems and he was forced to retire on lap nine. And he wasn't the only one as while in the lead, Laverty's bike expelled smoke on the start and finish straight, which also marked the end of his race.

Melandri overtook Sykes into the first corner but the Brit rider fought back, manoeuvring his way past Melandri on turn one on lap 17 pushing him wide. However Melandri made up the two-second gap in just two laps and was soon back in contention. On lap 19, Sykes was passed by Guintoli and Melandri and then on the penultimate lap, Melandri took the lead. There was a number of overtakes from the pair but Melandri had the advantage over the line to take the race win.

Race two saw Laverty back and meaning business – approaching the race with a cool and calm head. He had the advantage from the very beginning of the race and maintained it until the end of the 22 laps.

Sykes had an unlucky start to the beginning of race two after crashing out on the sighting lap and having to start from pit lane. He was in and out of the garage twice during the race, however he still managed to snatch the best lap of the race as well as a new lap record with 1'42.475.

Laverty was joined by Pata Honda rider, Jonathan Rea at the front of the pack but on lap 16 Guintoli edged his way past Rea to take the second step of the podium.  Melandri who had been running at the front in third place, ended up crossing the line in 12th due to a problem with his rear tyre.

Carlos Checa did Alstare Ducati proud and provided them with their best 2013 result to date by crossing the line in sixth, just behind the S1000RR of Chaz Davies.

The next round takes place at Imola on 30 June.