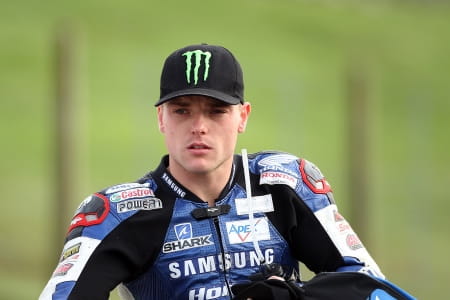 The first of a number of World Superbike tests scheduled to fall before the winter testing ban kicked off today in Jerez with PATA Honda’s pairing of Jonathan Rea and Leon Haslam, Ducati’s new signings Chaz Davies and Davide Giugliano, Aprilia’s Sylvain Guintoli and Marco Melandri plus others.

According to Bike Social sources, Lowes is testing alongside 2012/13 Crescent rider Leon Camier, however neither are actually confirmed for 2014. Lowes will be forbidden to talk publicly about the test as he’s reportedly still under contract with Honda until the end of November.

Eugene Laverty had also been linked to a ride with Crescent, although it’s now thought he’ll take a third factory Aprilia, possibly in the Alstare squad. Camier tested the Suzuki last week following the final round of the championship at Jerez, suggesting should Crescent opt to keep a current rider it would be him.

Lowes – who became the youngest ever British Superbike champion when he clinched the title from Shane Byrne last week – had been tipped to move to the MotoGP paddock with Paul Bird, however in recent weeks it has become clear this deal was not to be.