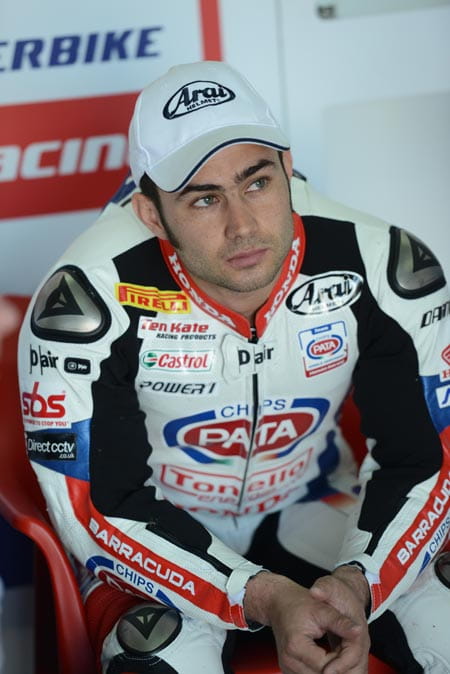 Leon Haslam’s well-documented leg injury was one of the main stories to emerge from last weekend’s World Superbike Championship action at Donington Park. And, few people would have ever expected the British rider to make the start line for his home race after suffering a severe broken leg in Holland just three weeks ago. Although the 29-year-old did make it onto his Pata Honda for the qualifying session, team decisions meant that he was unable to participate in the day’s double-header.

We caught up with Leon to see how he’s feeling after missing the British round of the series.

The past three weeks have been eventful…

“After the crash, I was airlifted back to the UK from Holland, and was able to have surgery straight away. After spending a few days in hospital, I began having physio to manage the swelling.

“Once the swelling had reduced enough, I was able to begin treatment to try and speed up the healing. This included hyperbaric treatment three times a week along with cyrotherapy and magnetic therapy – also three times a week. This was along with gym work everyday and a trip to the FA’s new training centre, St Georges Park, for hydrotherapy treatment in pools of eight-to-ten-degrees.”

I really wanted to take part in my home race

“Following my injury, I needed to target a return date and Donington being my home race was the perfect event to aim for. I knew it would inspire me to help get me through the days I spent in hospital and through all the pain I’ve been in lately.”

I knew I wouldn’t be competitive…

“I knew I wasn’t likely to be competitive at Donington because I couldn’t bend my knee properly, and was having to use my arms more which wasn’t easy. But I was keen to reach the target I’d set myself.

“Throughout the qualifying session, the pain was getting worse. The break itself was flexing and the bolts holding it all together were chafing. This meant I was about a second from where I would normally have liked to have been.”

Leon qualified in 14th position ahead of the races, and his team, Pata Honda, made the decision to withdraw him from contention.

The team made the right decision

“At the time, I was being a bit stubborn about being withdrawn from the race. I still wanted to race, but I knew that I could only probably finish, at best, in the top ten. I would have been in quite a bit of pain and knowing I wouldn’t be competitive for a podium, the team made the right decision.

“Having to watch the race from the garage was really frustrating. I know what I could’ve been capable of – at my home circuit – and that I was missing my home race.”

“Racing is my life – it’s my passion and it’s my job which I love doing so of course my natural reaction to any injury is to get back racing as soon as possible. But, I think anyone else in my position would do exactly the same.

“No biker will ever be 100% fit – they can only be 100% competitive and ready to race. As far as that’s concerned, I’m aiming to race in Portugal in two weeks’ time and to be 100% race fit by the Moscow event.”

“At the start of the season, the team were having a few electronic problems but now we’ve more or less overcome those and the team and the bike are making good progress. I want to keep pushing to be at the top of the podium if I can.

“However, now with my injury it’s not just the bike I have to worry about performing - it’s me as well with my personal injury, which does add pressure.”

I’m sure you will all be with us in wishing Leon a successful second half to the season and that we hope to see him on the podium soon.