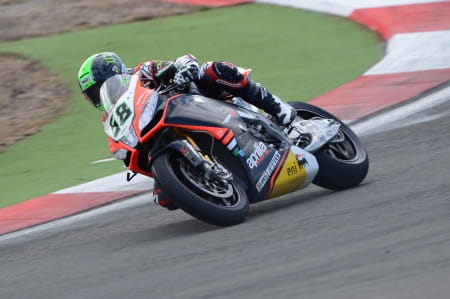 Eugene Laverty has shown Guintoli and Sykes that the battle for the World Superbike Championship is not over as he takes double victory at the first ever Superbike race in Istanbul. On Saturday, Great Britain’s Tom Sykes showed the field that inexperience is irrelevant as he took pole position from Aprilia riders Guintoli and Giugliano.

In both races, Sykes took off from the beginning but was reeled in by Laverty eventually. In the first race, BMW’s Marco Melandri fought through the pack from eighth after a slow start to eventually put himself in podium contention. The Italian, who had won at Istanbul twice previously in MotoGP was faster than anyone on track for the second half of the race but left himself too little time to challenge for the win once he’d passed Sykes for second.

A battle then ensued between the championship leaders of Sykes and Guintoli, with the Huddersfield man coming out on top to extend his championship lead. Toni Elias received an SBK baptism of fire as he came together with Davide Giugliano at the final corner, the Italian rider won a drag to the line to leave the Spaniard to settle for 6th place in his Red Devils Aprilia debut.

In the second race, Melandri wasn’t as strong and had to settle for a distant fourth while the podium vanished into the distance. Laverty won by almost two seconds from Sykes who once again got the better of Guintoli to increase his championship lead to eight points. Elias rounded out the top five to conclude a successful debut.

In World Supersport, Kenan Sofuoglu beat Sam Lowes to the line after an epic last lap battle. Lowes now leads the championship by 49 points meaning should Sofuoglu win in Magny Cours the Lincolnshire man would need just two points to take the crown.