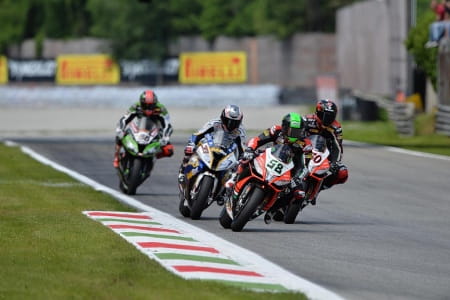 After winning both Superbike races in Istanbul today, Eugene Laverty has confirmed he will not be riding for Aprilia in the 2014 World Superbike Championship. The Irishman tweeted after winning the second Superbike race to say “Strange feeling to win both races and to be on the lookout for a new job. Anyone out there need a fast employee for 2014?”

Aprilia have made no secret of courting Melandri in previous years with attempts made to gain his services for both 2012 and 2013. With BMW pulling their factory effort from the series in 2014, Melandri was left with no choice but to find an alternative ride. The Italian had previously confirmed he was in talks with Aprilia, Kawasaki and some MotoGP teams.

As reported on Friday, Aprilia were due to inform Laverty of their 2014 plans this weekend and it appears they have done so, only for it not to be good news for the championship contender. While nothing is confirmed as of yet, sources tell us Melandri has signed a deal to ride the RSV4 next year, possibly alongside Sylvain Guintoli.