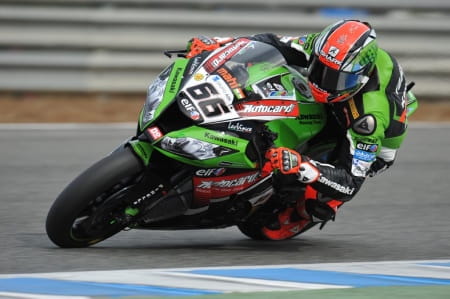 Eugene Laverty did everything in his power to keep the World Superbike title chase open in the first race at Jerez yesterday. The Irishman shot off into the distance from the start of the race, closely followed by BMW’s Marco Melandri.

It was clear Sykes was happy to leave those two to battle ahead while he focussed on the third place finish he’d need to secure the title. It wasn’t an easy task though, with Guintoli breathing down his neck throughout the whole race. At the front, after stalking Laverty throughout the race Melandri made a pass on the penultimate lap, pushing both riders wide and Laverty off the track. Knowing he had nothing to lose after being informed of Sykes’ third position, Laverty rode round the outside of Melandri at the final corner in what was most probably the move of the season to take victory on the final lap.

It looked as though the newly crowned, freshly shaven Champion would clear off in the final race, however Laverty soon caught up and saw him off to take the double in dominant fashion, reminding the World of what he could have done with a few less DNFs under his belt.

Sykes is the fourth Brit to take the Superbike World Championship for Great Britain, something the likeable Huddersfield bloke deserves after missing out last year by just half a point.