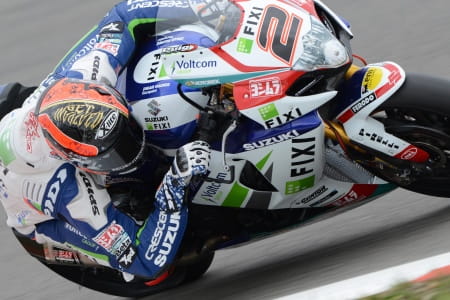 There are potentially just thirteen full time SBK riders heading into qualifying day at Intercity Istanbul Park after a first-day crash fest wiped out almost a quarter of the field.

Loris Baz announced he wouldn’t race in Turkey first thing this morning after an examination at the Clinica Mobile on the injuries sustained in his warm up crash last time out at Nurburgring. This would mean just nineteen riders would head out for the ninety minute test session this morning.

Having not seen any activity in a while, riders are reporting the track surface is incredibly slippery. This, coupled with the nature of the fast, flowing circuit saw four gigantic crashes in the morning session, wiping all four riders out of the afternoon’s first qualifying practice.

Leon Camier, seemingly plagued with bad luck for 2013, fell heavily in the first ten minutes of the session leading to organisers halting activity to recover both Camier and his GSXR1000 from the track. After initial checks in the medical centre, Camier was taken to hospital where it was confirmed he has a broken metatarsal. He is to undergo an operation in Turkey this evening and is almost certain to sit out the rest of the weekend.

Friday the thirteenth is certainly unlucky for Alstare Ducati. As if Carlos Checa wasn’t having a torrid enough season this year, the Spaniard highsided from his 1199 Panigale. He was taken to the Clinica Mobile as a result, where doctors diagnosed a contusion to the upper thorax as well as a possible fracture of the left scaphoid. Checa has been taken to hospital for further checks and won't return to track tomorrow.

Alstare’s other rider, Ayrton Badovini fell in the closing minutes of the session in a similar way to his team mate. His leg trapped under the bike, Badovini has reportedly either torn or strained a ligament in his left ankle. After sitting out this afternoon’s session, Badovini is expected to attempt an outing tomorrow.

Max Neukirchner, Ducati’s only other rider on circuit also fell this morning, again a highside. The German has broken his hand in two places and will sit out the rest of the weekend.

Should all four riders sit out the weekend, just thirteen full time riders plus two wildcards (Tolga Urpak and Yunus Ercelik) will take to the track in tomorrow’s sessions and all riders would make the first Superpole session by default.