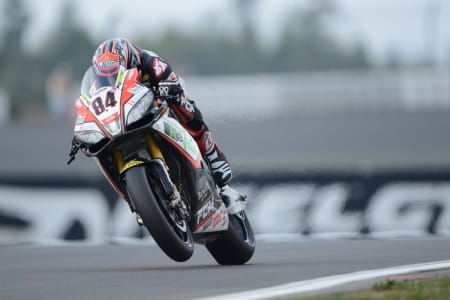 Bennetts reported the other day that Toni Elias would be heading to World Superbikes to ride for the Red Devils Roma Aprilia squad in place of Michel Fabrizio, who will in turn replace the injured Jonathan Rea on the PATA Ten Kate Honda.

Both deals will see Elias and Fabrizio on their new machines for the rest of the seasons, with reports suggesting the two could continue with their new rides into the 2014 season.

Former MotoGP race winner, Elias moves to the World Superbike paddock after a tough time of things since his last Grand Prix success, winning the inaugural Moto2 championship in 2010. However, since then Elias has failed to make an impression despite chances in both MotoGP and Moto2 and was let go by the Avintia Blusens team earlier this week.

PATA Honda found themselves in search of a new rider for the last five rounds of the season after Jonathan Rea fell on the oil of Federico Sandi’s blown Kawasaki last time out at Nurburgring, breaking his leg. Fabrizio stepped up to the position after rumours the team were courting him for a 2014 ride. The Italian has had a mixed season with the Red Devils Aprilia outfit, starting off with a podium in Phillip Island and having taken a number of top six finishes since, although a few poor results mean he sits just eighth in the championship.

The switch will come into force for Round 11 of the championship, as World Superbikes head to Turkey for the first time. The Istanbul Park circuit has seen good fortune for Elias previously, he finished second in the 2007 MotoGP race in Turkey. Fabrizio on the other hand, has never ridden there.